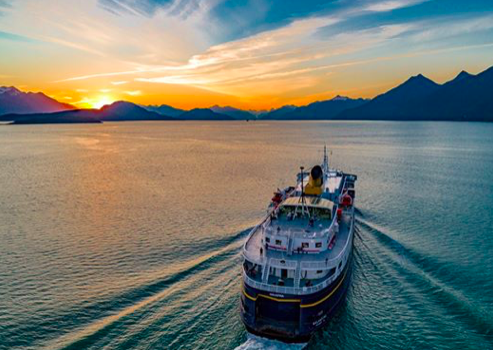 One of the most vehement fiscal debates this year concerned reductions to the Alaska Marine Highway System (AMHS) budget. Initially, the Dunleavy administration cut $97 million but ultimately agreed to a $43 million decrease – representing about one-third of AMHS’s operating budget.

This action allowed AMHS to continue operations, but necessitated fare increases, the sale or layup of existing vessels and schedule changes.  Public outcry has continued amid predictions of economic dislocation and health and safety concerns.

Hardest hit were smaller communities off the road system where ridership dwindles to extremely low levels during the fall and winter months.

Consequently, Cordova is without winter ferry service until next May.  Commensurate reductions will be experienced by ferry-served communities from Kodiak to the Aleutian Chain as well as communities in Southeast Alaska.

We might remember that before the days of state-subsidized ferry service, numerous private marine sector transportation providers served our coastal communities. Beginning in the 1880’s, with gold discoveries in Juneau and Douglas, the Alaska Steamship Company provided passenger and freight service throughout Southeast and later, Southwestern Alaska.

Steamers, like the S.S. Dora, plied the waters between Valdez, Kodiak and the Aleutian Chain.

Private transportation services cropped up wherever the economy was growing.

After World War II, rising labor costs and new competition from truckers and air carriers negatively impacted shipping companies. But it was after the AMHS’s inaugural voyage in 1963, that the Alaska Steamship Company was forced out of business in 1974.

Now, because of budget cuts, coastal non-roaded communities will need to explore other options to fill transportation gaps.

This is evidence of short-term capacity available to assist for unusual situations and one-time events.

Will the private sector ever offer services approximating those once offered by AMHS?  Demographics and economics will initially inhibit large investments of this type.

Realistically, what will occur is a division between scheduled passenger-only service and cargo-only service.  Tourism-based catamaran vessels based in SE Alaska and Prince William Sound are logical choices that could offer passenger service before and after their summer seasons. Also, there are any number of landing craft operations based in Cordova, Kodiak, and Juneau that could offer cargo services to surrounding towns with expanded barge service picking up the slack in larger communities.

This will come at increased cost and less convenience.  But, reductions in heavily subsidized ferry service are unavoidable, and, with AMHS’s new dynamic pricing structure, ferry fares will now be competing more closely with other forms of transportation.

When times are challenging, Alaskans usually respond with ingenuity and self-reliance.  After all, there are over 100 roadless communities in Alaska that have no state-subsidized transportation options whatsoever.

Coastal communities served by the AMHS will now split the cost of ferry travel 50/50 with the state.

Some believe year-round more highly subsidized ferry service should be provided no matter the cost. For that to happen, someone else’s budget must suffer, or Alaskans would be forced to accept even smaller Permanent Fund Dividends.

Communities that get no state-subsidized transportation service would be asked to help pay the tab.

Suggesting that cuts be reversed and service restored is self-serving and ignores how inequitable that would be – and eventually would sink the system for good.

AOC gets trolled: 'We have to start eating the babies