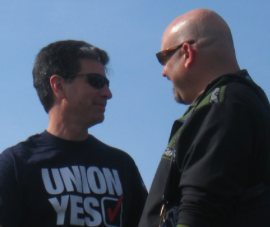 EDITORIAL: WHERE IS THE ACTUAL PRESS?

Across what’s left of newsrooms in Alaska, mainstream and public broadcasting journalists sheltered Mayor Ethan Berkowitz for 72 hours — until they just couldn’t.

It wasn’t until the mayor acknowledged at 4:30 pm on Monday that there are compromising photos of him in the possession of a broadcast reporter that the Anchorage Daily News and other news outlets decided it was a story. Up until that point, it was a figment of Must Read Alaska’s imagination.

This isn’t the first time the ADN has protected Berkowitz. One of the most egregious examples was when his wife, Mara Kimmel, ran over a pedestrian when Berkowitz was queuing up his run for Congress.

The ADN buried that story, never linking Kimmel to her politically ambitious husband, who was just leaving the Legislature to launch his bid against Congressman Don Young.

Over this past summer, the ADN gave Alaskans an example of what journalism is — they pursued the story of a flirtatious set of text exchanges between former Attorney General Kevin Clarkson and a woman who works in the Governor’s Office.

Those text messages became uncomfortable for her, although at the beginning of their exchanges, she appeared fully onboard with a text relationship. They were relatively innocent, but there were plenty of “kissy” emojis from Clarkson to the woman, and the newspaper was relentless in its pursuit of more salacious material it could write about in this case.

Even last week, the newspaper’s top investigative reporter, Kyle Hopkins, was complaining on Twitter that he couldn’t get access to more personnel records pertaining to Clarkson and the still-unnamed woman, who had finally tired of the relationship and took it to a “friend” who took it to the newspaper.

Andrew Halcro, of the Anchorage Community Development Authority, who is a surrogate for the mayor, has posted daily on Twitter how many days it has been since the governor would not release personnel records of Clarkson. Halcro fell silent over the weekend on his daily rant.

The Alaska Press Club had to get in on the action, sending a letter to the governor demanding release of personnel documents.

There is no doubt that the full story of reporter Maria Athens and Ethan Berkowitz has not been told. Athens, who started this storm, has more photos of the mayor — frontals views of him in compromising positions, which he sent to her and which she has in a phone that may or may not be in the possession of law enforcement. She has shown these photos to people who have described them to MRAK.

The photographic evidence suggests that this relationship went on during a time when he was running for office, before 2017. The nude photo of him was evidently taken in his private office bathroom in City Hall while he was beginning to be known as the “nothing to report” mayor, the one who never had anything to tell the Anchorage Assembly during his Mayor’s Report on the agenda.

As of now, the mayor has admitted only to what he had to admit to and no more. But there is more. A lot more. The problem with the Anchorage Daily News editorial team, is that they thought Athens had faked the first nude photo of him — the now-infamous back shot. They wanted more proof, and Maria Athens all of a sudden was not a credible reporter in their eyes.

The “nothing to report” ADN newsroom just could not believe that the photo was anything but a fake, and so remained mum on Friday, Saturday, Sunday and until the mayor’s written confession came late Monday afternoon.

This is because Berkowitz is a Democrat, and until he said the photo was real, it was not the time to “believe all women,” as the Left likes to say.

The mayor is the Left’s golden boy, and the newsroom needed absolute proof before they would run with a story that would reflect poorly on him.

The double standard is stunning, protecting Berkowitz at all costs at a time when many believe he is — or was — preparing to run for governor.

The local Alaska mainstream media now has the perfect opportunity to prove it is unbiased.

Alaskans should expect weeks of follow up stories on the mayor’s infidelities and not simply accept the mayor’s carefully worded press release.

Our unanswered questions that we offer to their reporters at no charge:

Millennials taking over the workplace: 3 things to know