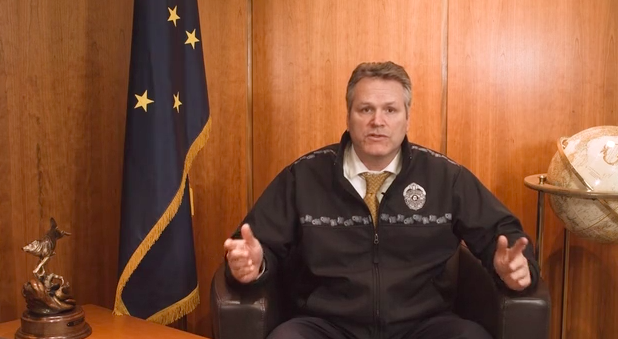 TAKING IT TO THE PUBLIC SQUARE THIS WEEK

The weekend belonged to the House Majority, with hearings around the state on the governor’s proposed budget.

This week belongs to the actual fiscal plan to bring the state budget in line with actual revenues, and to close the $1.6 billion gap this year. The governor is out and about, with a heavy schedule of appearances on the budget and the three constitutional amendments he wants to send to voters — amendments he says will stabilize things going forward:  locking in the Permanent Fund dividend formula so it’s no longer politicized, putting in place a spending cap, and making any income tax subject to a vote of the people.

On Must Read Alaska’s Facebook page on Monday, over 1,100 people took part in 23-hour poll on the budget.

The result? 93 percent of respondents said they leaned toward budget cuts rather than an income tax and reduced Permanent Fund dividend. 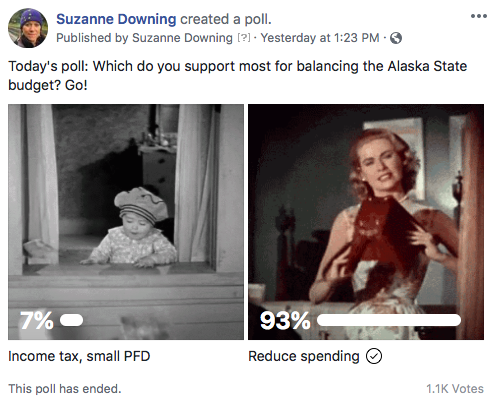 As with the House Finance Committee hearings and the governor’s forums this week, a Facebook poll is self-selecting and not representative of the public at large.

House hearings have leaned heavily toward income taxes and reduced dividends, except in the Mat-Su Valley, which supported a reduced budget. In other areas of the state, union members and teachers dominated the testimony.

Gov. Michael Dunleavy is taking the unusual step of taking his case to the people during the legislative session, when normally governors tend to let the Legislature have the spotlight.

But this year is like no other. This governor wants to roll back spending. Under four years of Gov. Bill Walker, the State has gone through $14 billion in savings to hold government services at levels the state could not actually afford. Walker added more than 40,000 Alaskans to the Medicaid rolls and hired climate change experts and “change agents.” He cut Alaskans’ dividends.

This week, the Dunleavy budget, his 10-year fiscal plan, and three alternatives that the governor is using for comparison, will be vetted.

Governor Dunleavy has proposed a budget based on five core tenets:

“This plan presents a vision of a smaller State government, with more money in the pockets of Alaskans, planting the seeds for economic growth and providing higher levels of freedom and individual liberty. This is accomplished by reducing State spending and making statutory and constitutional adjustments to prevent future excessive growth in government spending at the expense of the people,” the plan says.

Dunleavy started in Kenai, with a forum that included his budget director, commissioner of Revenue and others in his cabinet. He was applauded as he walked into the room at the Cannery Lodge. A few protesters were outside, and a few were inside, but they were respectful. Everywhere he goes people are giving him red pens, to indicate their hopes for vetoes of the House budget.

Today, the governor heads to Anchorage, where he’ll face heavy union resistance at his evening forum at the 49th State Brewery.

7am – 8am: Alaska Miners Association

According to those traveling with him, Dunleavy is getting great response, with people shouting “Stand strong, Mike!” as he passes through airports and before he goes into interviews and meetings. And then there’s this thing with the red pens — he’s being given them wherever he goes.

That’s not the message that came through during the House Finance Committee hearings, however.

House Majority members have made it clear that they do not intend to pass the governor’s budget, but are eventually going to offer some version of former Gov. Bill Walker’s budget to the Senate.

But so far, the only plan on the table is the Dunleavy plan, and it would impact all Alaskans because it calls for a huge chunk out of spending on everything from education to Medicaid to public broadcasting.

House Speaker Bryce Edgmon summed up his opposition while on KTOO last week, saying that he doesn’t understand why Dunleavy keeps talking about his budget, since Edgmon doesn’t like it.

“The governor’s emphasis … continues to be on large reductions and on a full PFD, as well as backfilling the PFDs, which, you know, I don’t think that’s where the Legislature is in terms of making decisions on the upcoming budget,” he told KTOO.

Protesters are expected in the Anchorage meeting this evening. The AFL-CIO received a quickly granted parade permit and has several special interest groups joining union members in what is predicted to be a rowdy and disruptive gathering outside the forum at the 49th Street Brewery. Security will probably be heightened inside the building as threats have been made on Facebook.