Know your enemy, and your Alaska statute 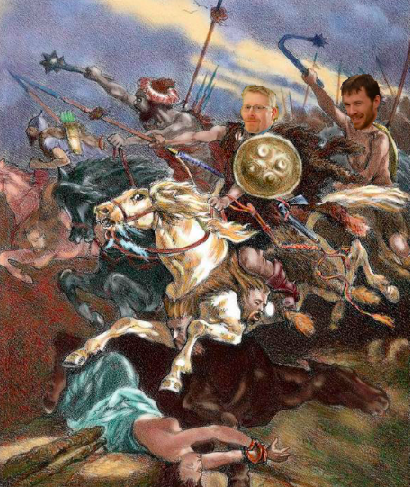 Hopefully, one day the Dunleavy Administration will figure out what kind of people leftists and Democrats really are. The appointee and apparatchik cohort of activist Leftists are vile, nihilistic people for whom truth is meaningless and the only thing that matters is advancing their position. The revolution is its own morality.

The Leftists/Democrats have mounted a frontal assault on all Dunleavy hires and appointments. The Administration has not lifted a finger to defend any of their people; the lefties mau-mau them and the Dunleavy Administration fires them or withdraws their appointment.

So, what do the Dunleavy people want, a Democrat administration? If they’re going to try to placate the Left with their Bruce Botelho-approved appointments, the people of Alaska might as well have elected Mark Begich or reelected Bill Walker.

So far, the Administration hasn’t kicked Public Safety Commissioner designee Amanda Price to the curb, but that is probably because she has the backing of the Public Safety Employees Association, which backed Michael Dunleavy for governor.

Alaska witnessed a most unseemly spectacle late last week, as former Walker Chief of Staff Scott Kendall trashed Commissioner Price with a smorgasbord of rumor, innuendo, and hearsay. All in front of a House committee run by Democrats.

Government is so insinuated into life in Alaska that a public official can’t do anything without doing something for somebody — or doing something to somebody. The people who feel they’ve been “done to” tend to remember.

If you’ve actually done something in government, then you’ll have enemies and they’re going to line up to tell the Legislature what they don’t like about you.

It’s not just that Kendall badmouthed Price. That sort of thing happens often enough. What made it so unseemly is that he did it as her former boss.

An interested party testifying for or against a nominee is just the public process in action. The former governor’s chief of staff testifying about a former State employee is essentially a job reference, and there are laws about that.

Specifically, there is Alaska Statute 09.65.160, which grants immunity to a person based on their own observation and given in good faith.

Kendall was not Price’s direct supervisor for very long; just long enough to collect some petty complaints about her and fire her. He had little if any direct observation of her work, but he was in her chain of command, just as he is in the chain of command of all executive branch employees except those employed by the boards or commissions, which have their own hiring authority.

Kendall has no personal impression of her work; everything he said was either made up or rumor, innuendo, and hearsay, and the reference was not made in good faith but rather to achieve a political objective. That could be a problem for him, with the aforementioned AS 09.65.160.

As a State employee, Kendall is bound by AS 39.25.080, which statute explicitly sets out what aspects of a State employee’s employment are public record, and those aspects are little more than name, rank, and serial number, to include date of hire and separation and rate of pay.

In my time, the State discouraged supervisors and managers, when asked for a job reference, from giving any information beyond that allowed by AS 39.25.080 and answering whether the person was eligible for being rehired. (A State employee dismissed for cause or who failed a probationary period is not eligible for rehire for a period of time, and in some cases permanently.)

I’ve been gone from State service too long to know more than the most general contours of the Executive Branch Ethics Act in its current incarnation, but if Kendall derived any personal benefit from the mau-mau operation last week, he may well be afoul of it.

As a general matter the Ethics Act does not apply to Democrats. And that is the root of the problem; the hubris of leftists. Whether in DC or Juneau, it is evident that the Left believes that laws do not apply to them.

Kendall is a lawyer. Although I’m told he’s not the sharpest knife in the drawer, he should have known he was treading close to if not over the edge of illegality with his little show for the Democrats on the State Affairs Committee. The essential fact is that in his arrogance, he thought that for somebody special like him, it was OK to flout the law and throw all sense of courtesy and respect for a nominee out the window.

Courtesy and respect? That’s for the little people.

Rep. Laddie Shaw comes in for a landing