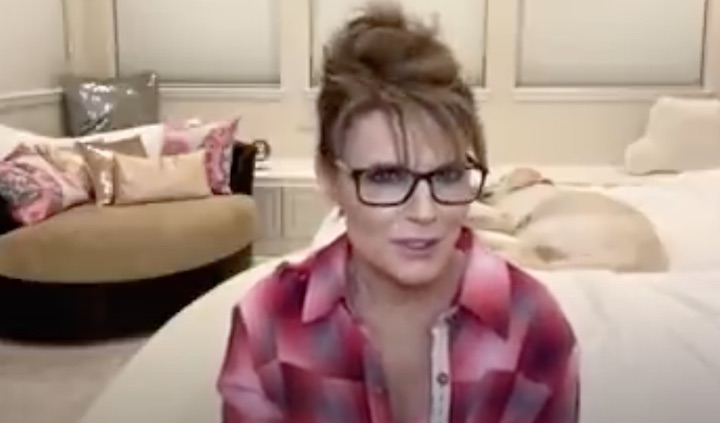 All is forgiven, apparently, for his leaking her emails and photos.

“I made a mistake some years ago … and I’ve learned a lot since then,” said Palin in a video, adding that it’s “coming down to the wire” and she wants more Americans to speak out on Assange’s behalf and “to understand what he has done and what has been done to him. He was working on the people’s behalf to allow information to get to us so that we could make up our minds.”

Assange is the Australian editor, publisher, and activist who founded WikiLeaks in 2006. After the 2010 leaks, the United States government launched a criminal investigation into WikiLeaks.

Assange leaked thousands of email messages; the ones most relevant to Alaska contained Palin family photos, along with evidence the governor may have conducted Alaska business via her personal Yahoo account — all leaked after Palin became Sen. John McCain’s vice presidential running mate.

WikiLeaks also leaked numerous documents from the Alaska Democratic Party in 2016, which showed the party was in trouble with its base for rigging the electoral votes for Hillary Clinton, when most Democrats in Alaska voted for Bernie Sanders.

Among those passing along intel to the National DNC was Kay Brown, then-executive director of the Alaska Democratic Party, referencing the help she’s received from Hal Gazaway, the chair of District 19 Democrats.

Also appearing in WikiLeaks leaked documents are items on now-Sen. Elvi Gray Jackson, and Anchorage Daily News reporter Alex DeMarban, who was described as having “a difficult time comprehending and recording information,” by the then-communications director of the Alaska Democratic Party:

Assange’s fiancée has also asked President Donald Trump for a pardon of the WikiLeaks founder, to stop Assange from “falling into the hands of the Deep State.” Stella Moris asked Trump “show mercy” before he leaves the White House.

Assange is currently being held in Her Majesty’s Prison Belmarsh, men’s prison in Thamesmead, southeast London, England. A judge is scheduled to rule on Jan. 4, 2021 about whether he should be sent to the U.S. to face justice over leaked classified military cables that pertained to the Iraq and Afghan wars.  Moris told Fox host Tucker Carlson she believes Assange will not get a fair trial if he is extradited.

“Everyone agrees this is a terrble case,” Morris said to Carslson. “It is the end of the First Amendment if it comes to pass.”

Return of the light