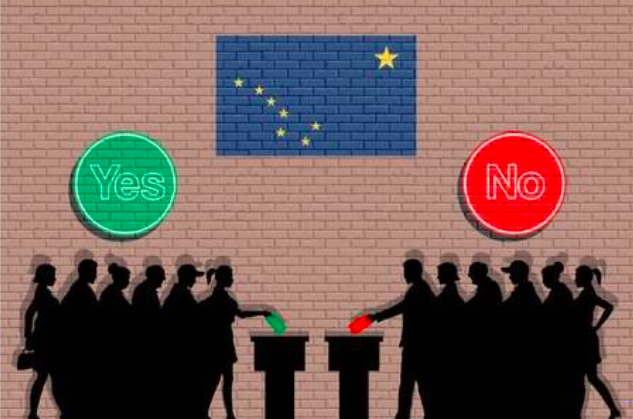 THROW OUT SOME VOTES? ALASKANS SAY ‘NO THANKS’

Defend Alaska Elections—Vote No on 2 announced 25 co-chairs to lead the campaign to defeat Ballot Measure 2.

The community leaders who have lent their names to the defeat of the rigging of Alaska’s elections include Chairman John Sturgeon.

“Alaskans already know how to vote; they have been doing it since statehood!” said Tim Navarre, a Democrat, lifelong Alaskan, Kenai City Council member, and former president of the Alaska Municipal League.

“I believe outside interests are trying to change Alaska’s voting laws to suit their own interest. Presently my vote counts today, and that is the way it should be,” said Bob Sivertsen, a Republican and lifelong resident of Southeast Alaska, mayor of Ketchikan, and advocate for seniors.

The group has the backing of Libertarian Dick Randolph, who said, “The billionaires supporting Ballot Measure 2 say it will give voters ‘more choice and more voice. This is utter nonsense. It will actually take away voters’ choices, by discriminating against small political parties.”

“Erecting new barriers to voting by increasing ballot complexity and throwing out votes is a recipe for disaster,” said Susie Linford (Non Partisan), award-winning chef and longtime community pillar in Anchorage. “Our current system is fair and simple, and most importantly, every vote counts!”

The Alaskans for Better Elections group trying to pass Ballot Measure 2 is led by Scott Kendall, the former chief of staff to Gov. Bill Walker and a leader in the Recall Dunleavy Committee.