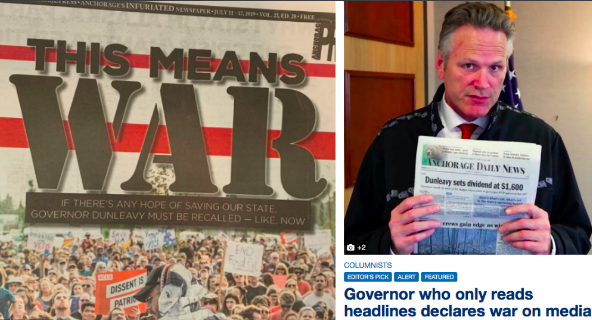 The alternative newspaper in Anchorage that just a few weeks ago declared war on Gov. Michael Dunleavy, stating the only way to save the state is to recall him, has a new twist in its logic:

Now, the newspaper says it is the governor who has declared war on the media.

In a top story, the Anchorage Press headlined “Governor who only reads headlines declares war on media,” and went on to describe how Gov. Michael Dunleavy “has decided he will go directly to the people on his Facebook page AK GOV PRESS. ‘If the press isn’t going to get it right…’ he declared as straddled in front of the camera with a John Wayne cockiness, ‘we’re going to go directly to you.'”

Dunleavy said a whole lot more in that video, which launched his AkGov Press page on Facebook. He was pointing out the inaccurate headline and explaining why he was launching this Facebook page to speak to the people of Alaska, unfiltered by editors and reporters.

His video was a blockbuster, with 1,475 shares, 409 comments, and 924 reactions. Not bad for a premier of a Facebook page. In Alaska, that would be considered viral.

The Anchorage Daily News story that caused Dunleavy to troll the newspaper in the first place? That story posted on Facebook was shared 81 times, got 216 comments and 259 reactions. Still a good result, but clearly not in the same league.

Watch the governor’s video for yourself at this link:

Toothless man gets teeth replaced after all