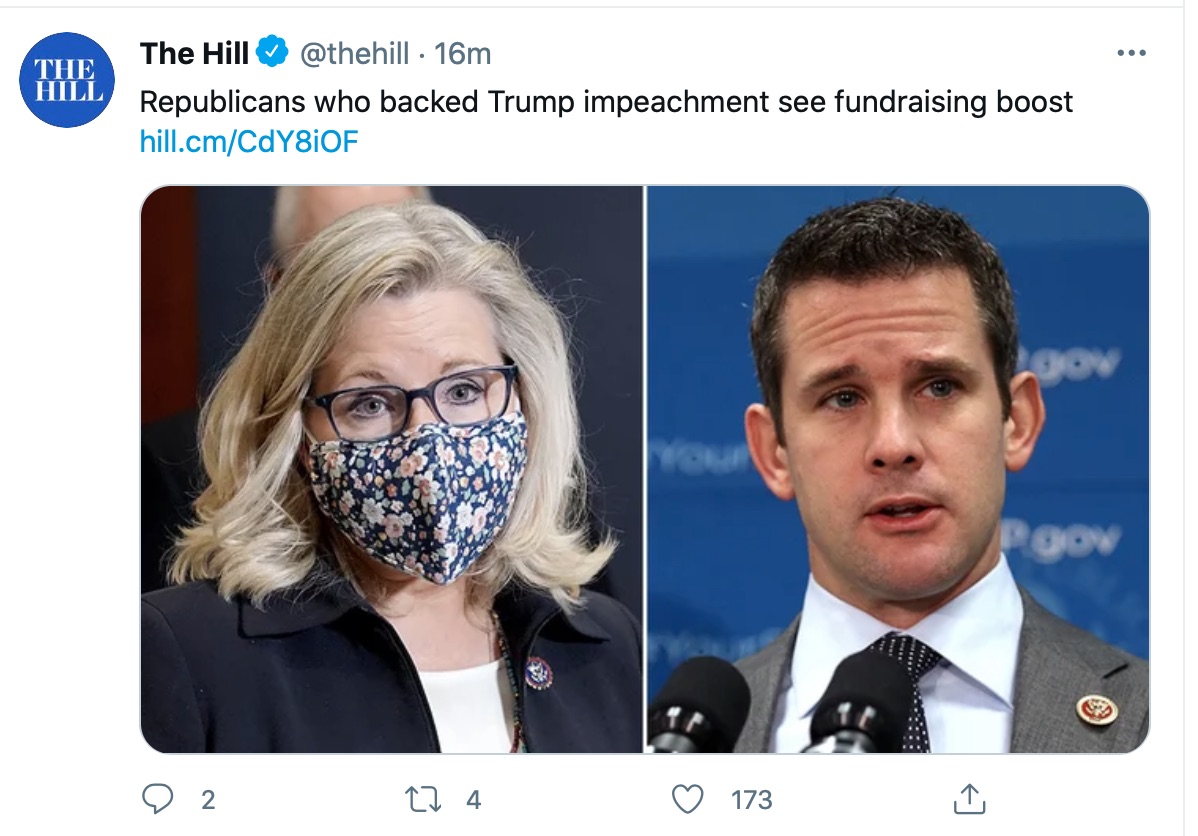 The Hill, a mainstream news site in Washington, D.C. that has a politically left bias, came to the conclusion over the weekend that Republicans in Congress who voted to impeach and convict President Donald Trump earlier this year saw a bump in fundraising for their upcoming reelection bids.

While news site went through the campaign finance reports of several in the House, it did not report the financial comparisons for one of seven Republican senators who voted to convict Trump. Sen. Lisa Murkowski is the only senator of the seven who will face reelection in the 2022 cycle, and in her case, she appears to have paid a price in terms of financial support for her campaign.

The Hill pointed to the fundraising prowess of Wyoming Congresswoman Liz Cheney, and Illinois Congressman Adam Kinzinger, both Republicans who supported impeachment.

“The majority of House Republicans who voted to impeach former President Trump in January saw fundraising gains in the first three months of the year despite intense backlash from members of their own party, according to new financial disclosures,” The Hill wrote.

“Most of the Republicans who publicly went against Trump after the Jan. 6 attack on the Capitol saw their 2021 first quarter hauls increase from their 2019 hauls during the same period. Two of Trump’s most high-profile critics in the House received a major financial boost in particular: House GOP Conference Chairwoman Liz Cheney (Wyo.) raised $1.5 million at the start of 2021 compared to $321,000 during the same period in 2019, while Rep. Adam Kinzinger (R-Ill.) brought in $1.2 million during the first three months of the year compared to $326,000 in 2019,” it continued.

Sen. Murkowski needs to catch up with the funds she raised six years ago in order to hire staff for her 2022 campaign and start her ad strategy. She said as much in her recent emailed fundraising pitch to Alaskans, in which she reported she is meeting with her fundraising and finance team this weekend.

“As of right now, we are behind our fundraising and finance goals. I’m reaching out to a few tried and true Team Lisa supporters to see if you are interested in making a donation today,” Murkowski wrote.

The narrative in The Hill that going “anti-Trump” was good for lawmakers back home is not completely born out by other facts further down in the story. Missouri Sen. Josh Hawley, who worked to block the certification of the Electoral College results, raised $3 million in the first quarter, and Texas Sen. Ted Cruz raised $5.3 million. Both Hawley and Cruz are not up for reelection until 2024.

The Hill also pointed to Rep. Jaime Beutler, a Republican serving in a blue district in the state of Washington. Her vote to impeach Trump went over well back home, as she raised $745,000 in the first quarter, compared with $287,000 in 2019.

The Hill mentioned that Georgia Rep. Marjorie Taylor Greene brought in $3.2 million during the first three months of the year, while Louisiana Rep. Steve Scalise raised $3.2 million. Both are pro-Trump Republicans.

Read the story at The Hill.