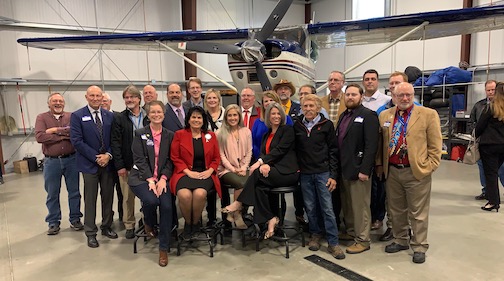 Alaska House Republicans held a giant fundraiser on Wednesday night in Anchorage, with over 100 people attending.

The event took place at a hangar adjacent to Lake Hood and had a pre-COVID-19 vibe about it, with a few people wearing masks, but everyone wearing smiles.

In many ways, it was like the “old days,” when Republicans charged forward excited and engaged in Alaska, confident in their prospects.

“This next session is the most important in state history and that makes this election also the most important. You can send down people to Juneau who are interested in dipping hands in people’s pockets or send people to do the hard work required to tackle the challenges in front of us. We need to put the Republicans back in charge,” said Lance Pruitt, House Minority leader. He gave a rousing speech to rally everyone to get through the final stretch and bring the Republicans back to power in the House this November.

The election is 33 days away, and it’s common for the House Republicans to hold an October fundraiser that can be used to drive the messages for their members during the final days.

Most all of the House Republicans were present, with the exception of Louise Stutes of Kodiak, and Steve Thompson and Bart LeBon of Fairbanks. LeBon was taking advantage of good weather in Fairbanks to go door to door, as he is in a competitive race against Democrat Christopher Quist.

Numerous candidates who won primaries but are not yet incumbents were also in the hangar, including Ron Gillham of Soldotna, Keith Kurber and Kevin McKinley from Fairbanks, Mike Cronk from Tok, and several from Anchorage and MatSu — Tom McKay, Ken McCarty, Kevin McCabe, Kathy Henslee, Paul Bauer, and James Kaufman, to name a few.

The mood was upbeat and positive, and although not all of the candidates will prevail in November, the sense of the room is that the Republicans will take back the House Majority that will work more cooperatively with the governor. The governor’s Chief of Staff Ben Stevens attended the event.

Republicans were victorious two years ago, but after the election in 2018, seven Republicans betrayed the majority and installed Democrats in power in a bipartisan coalition. Most of those have been unelected by their districts at this point in the election cycle, but the new Republican candidates still have to make the case to the voters that Republicans present better ideas and will govern smarter than the Democrats did over the past two years.