Dan Fagan: We need Dan Sullivan now, more than ever 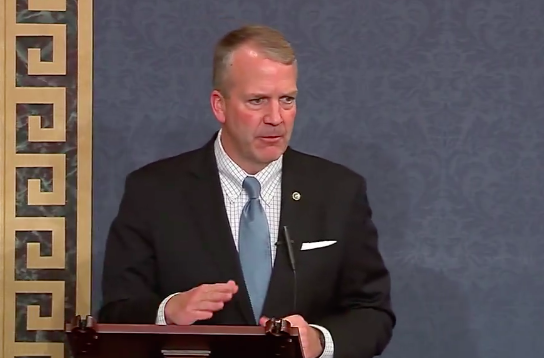 Leftists are – at their core – first and foremost – above all else – anti-Israel.

So, it’s no surprise uber-leftist John Kerry leaked classified information to Iran, the world’s number one sponsor of terrorism and Israel’s biggest threat.

Newly leaked audio reveals Iran’s foreign minister admitting Kerry told him about more than 200 Israeli covert operations in Syria while he was secretary of state under former President Barack Obama.

It might surprise you to know Republican U.S. Senator Dan Sullivan of Alaska was one of the first to take to the senate floor Monday and call for Kerry’s resignation.

“This revelation is shocking and a betrayal of one of our most crucial allies in the world,” said Sullivan.

Sullivan leading the charge against Kerry surprised some after he announced recently his endorsement of his colleague in the senate, Lisa Murkowski, if she ran for reelection.

No one’s ever mistaken Sullivan with leaders like Senators Ted Cruz, Rand Paul, or John Neely Kennedy. Unlike these three, Sullivan typically avoids fighting controversial battles where he might catch hell from the liberal media.

But even with Sullivan’s low-key approach, many Alaska conservatives were shocked and infuriated after he described he and Murkowski as a good team.

Many Donald Trump supporting Alaskans couldn’t believe Sullivan would endorse the former president’s chief antagonist. Especially after Alaska’s GOP leaders announced Murkowski would not be allowed to run as a Republican.

Murkowski voted to impeach Trump, refused to approve one of his Supreme Court nominees, and single handily thwarted his attempt to repeal Obamacare. Murkowski voted against the repeal, giving the potential lack of funding for abortion as the reason.

When Sullivan claimed he and Murkowski made a good team, many Alaska conservatives wondered whose team he was on.

But on Monday, on the Senate floor, Sullivan shifted back to conservative mode and went hard after Kerry for leaking classified military information to Iran. Sullivan sounded more like Ted Cruz than someone sympathetic to liberal Lisa.

“It’s unclear why John Kerry would relate such information to the leaders of the largest sponsor of terrorism in the world, said Sullivan.” The secret information was given to one of America’s most sworn enemies undermining the interests of one of our most important allies, the state of Israel.”

It’s hard to say if Sullivan was trying to repair his conservative street cred with Alaskans with Monday’s scorching senate speech calling for Kerry to resign.

Sullivan was getting killed, even on his own Facebook fan page, for endorsing Murkowski.

A couple of days after Sullivan’s praising of Murkowski, a poll was released showing 87% of the state’s Republicans disapprove of Alaska’s senior senator. 63% of all Alaskans are not happy with her.

Sullivan may have miscalculated how unpopular Murkowski is with Alaska conservatives. Especially Trump supporting Alaskans.

Sullivan sounded like the same conservative he appeared to be during the campaign.

It was like a kick in the gut for many freedom loving Alaskans when Sullivan announced he’d endorse Murkowski. Especially in light of authentic conservative challenger Kelly Tshibaka running.

Sullivan may have endorsed liberal Lisa after Senate President Mitch McConnell of Kentucky did the same. McConnell is the embodiment of the Swamp and has the backing of some of the nation’s biggest donors. For Sullivan to go against McConnell’s wishes could have an impact on his standing with those who financially undergird the Swamp.

But we are at war. With the illegal Biden regime now in control in Washington D.C., Sullivan’s role as Alaska’s senator could not be more central to winning our cold civil war with Democrats turned socialists bordering on full-blown communists.

Sullivan must up his game. He’s a Marine and and we know he’s a fighter. Monday’s bold speech on the Senate floor calling for Kerry to quit is the Sullivan we need for such a time as this.

Sullivan must become more aggressive when battling the villain currently occupying the White House and the forces controlling him. He must put aside personal political ambitions and take a stand against the D.C. swamp.

Our nation is under siege from an enemy within. These Marxists hate capitalism, the free market, free speech, and individual liberty. Their twisted goal of equity for all can only come with the stripping of our freedoms. They must be defeated.

Sullivan needs to use the considerable power given to him by Alaska voters to fight this war, even if it costs him favor with the D.C. Swamp.