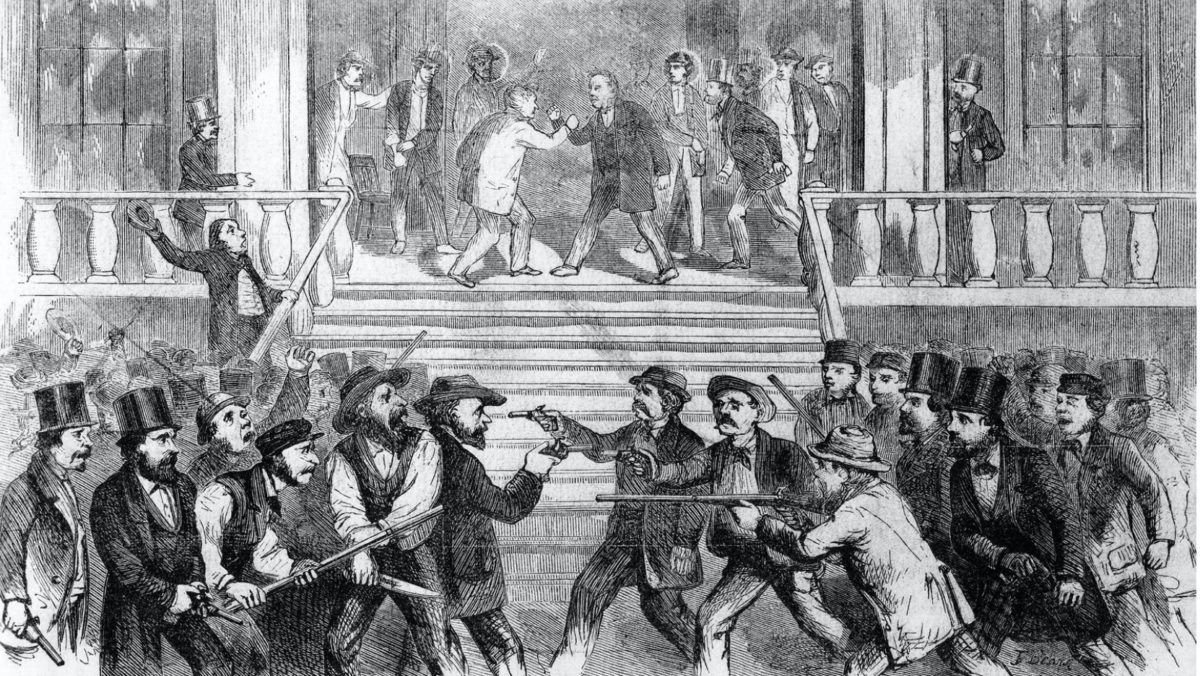 A few years ago I would have said that Jim Crow, like John Brown, lay ‘a moldering in the grave.

Comrades Barack Obama, Stacey Abrams, and their ilk have brought both back to life.

For those with more recent and therefore inferior government school education, John Brown was an ardent abolitionist. Brown and his sons first claimed attention in Kansas during the time it was referred to as “Bleeding Kansas.”  The fruit of “popular sovereignty” was guerilla war, as Kansas was flooded with pro-slavery adherents and abolitionists.

Brown had come to Kansas with a wagonload of arms and had the financial support of several prominent Northeastern abolitionists, some of whom were or became close to the Lincoln Administration.

After pro-slavery guerillas sacked the town of Lawrence, Kansas, Brown led his guerilla band against a settlement of pro-slavery settlers and massacred five men by hacking them to death in what became known as the Pottawatomie Massacre.

Brown went on to participate in a convention of abolitionists in Ontario which set up something like a provisional U.S. government opposed to slavery. Again supplied and funded by prominent abolitionists, Brown moved to Maryland and established another guerilla band with the intent of capturing the U.S. Arsenal at Harper’s Ferry, Virginia, and using the arms captured to arm a slave rebellion in Virginia.

Shortly after it ratified the 14th Amendment, Ohio made it illegal for blacks to enter the State. Oregon, for many years, excluded blacks from entering the territory and state; its tardiness in ratifying the 14th and 15th Amendments is right up there with Mississippi’s.

While most de jure ethnic and racial discrimination ended by the 1970s, de facto discrimination persists and is ironically most vociferously advocated by the left and especially in academia. But now, Jim Crow Laws are the new “bloody shirt” of the Left.

I grew up in the rigidly de jure segregated South of the 1950s and 1960s; I know what Jim Crow Laws look like. I knew the words and the tune to “John Brown’s Body,” but we didn’t sing it, and there were still people who would turn their back to the stage if “Battle Hymn of the Republic” was sung or played. My most definitive memory is of White and Colored water fountains and entrances to buildings.

The theater in my home town confined blacks to the balcony. Restaurants and hotels prominently displayed “White Only” signs. No black would have gone to the front door of a white person’s home. Even at a young age I appreciated the irony of the fact that blacks and whites would eat together in the fields and even drink from the same dipper and from the same water bucket in the fields, but the segregation of eating elsewhere was strong enough to warrant mention in Martin Luther King’s “I Have a Dream” speech.

We had a black hired man named Martin. At lunch time, Martin would come to the back door and my mother or grandmother would give him “dinner,” as it is called in The South, alone at the fairly fancy table in the dining room while we ate at the kitchen table.

My last contact with the vestiges of de jure segregation was in late 1970 or early 1971. We were living in Atlanta but out of nostalgia if nothing else I wanted my pregnant wife to see my family doctor in my home town because I knew and trusted him. The signs were down but the separate White and Colored entrances to the waiting room were still there.

Out of habit I took my wife in through the white entrance and checked in. The white waiting room was packed and there were people sitting on the floor down the hall. The black waiting room was empty, so we sat over there to not a few raised eyebrows. My hair was long enough and I’d been gone long enough to be a Yankee anyway, so I didn’t care.

We saw the doctor and since it was late in the day went to my parents’ house rather than drive back to Atlanta.   They’d already heard about our shocking act. My father’s reaction was words along these lines though I can’t remember the direct quote: We haven’t seen you in almost two years and the first day you’re here, you do something we’re going to have to live with. My parents and I had had a, shall we say, difficult patch for the last several years, and I guess that was just a continuation and not the last time.

That is an example of how strong the real “Jim Crow” was, and by Southern standards, my parents were liberal on racial issues.   My father was a small town merchant and his advice to me on racial issues was, “son, it doesn’t matter what color the hand is; the money is green.”

Your President, not mine, knows all about Jim Crow, after all, he was buddies with a Ku Klux Klan officer. My father always said he didn’t know who was in the Klan but he knew who wasn’t in the high school band and yet still bought white shoes. Maryland was a segregated state that mandated segregated public accommodations.

The District of Columbia was too, but they don’t like to talk about that. Actually, once the Civil Rights Act and Voting Rights Act became a reality, the once rigidly segregated states of the deep South accepted de-segregation with less opposition than the Border States or even the formerly abolitionist capital, Massachusetts.

Opposition to school desegregation through busing was particularly vehement in the Border States such as Maryland, and Biden was vocal in his opposition.

“Liberal” Boston’s opposition to busing was on the nightly news almost constantly. In the Deep South, those with the motive and means just formed private “White Only” schools, bars, and restaurants styled as private social clubs.

Stacey Abrams was born in 1973 and went to integrated schools and on to an Ivy League education; she knows absolutely nothing about the Jim Crow South. The year she was born, Maynard Jackson became the mayor of Atlanta and the first black mayor of a major city in The South.

She was born in Wisconsin but her family moved to Atlanta in time for her to graduate from an integrated high school, Avondale, there. She had a “career track” post-secondary education and we can be permitted to speculate who paid for it and how much of it was affirmative action.

The reality is that Atlanta is the mecca of black opportunity in America for anyone working outside the entertainment industry, and it isn’t bad even for entertainment opportunity for blacks. Macon, Georgia, 75 miles south, was once the center of black “soul” and rhythm and blues” music in the Country, though Detroit was a strong competitor. Frankly, Abrams is a product of black privilege available only in Atlanta and maybe a few other black majority cities, and yet she is screeching about Jim Crow II.

The reality was that in the Deep South, blacks and whites were used to living together. Public accommodations were segregated, but so long as The South remained primarily agricultural, private life outside the home was very integrated. “Old Martin” as we called our hired man, had as much influence on me in my youth as my father and grandfather had, more on some things.

When I was very young my playmates were as often the kids of the fieldhands as were the kids of my white neighbors. As I got older and more able I worked, at least as much as the kid whose father owns the place works, in the fields, took meals in the fields, and drank from the same water bucket.

Were we equal? No! Were we separate? No, not really. And for much of our lives we lived together. Ironically, now that isn’t the case where I grew up; public accommodations are totally integrated, work is totally integrated; personal life is totally segregated unless there is some political or economic reason for blacks and whites to be together. It is a lot like what I experienced in Juneau between Democrats and Republicans who were only in the same room at a public event, in a public accommodation, or if they were being paid to be there.

The whole “Jim Crow II” meme is aimed at the ignorant and emotional. The government schools have made two generations, more in some places, of Americans pig ignorant of our culture and history; it was for a reason. You can tell most people under 50 in America anything and they’re likely to believe it if you speak from a position of perceived authority.