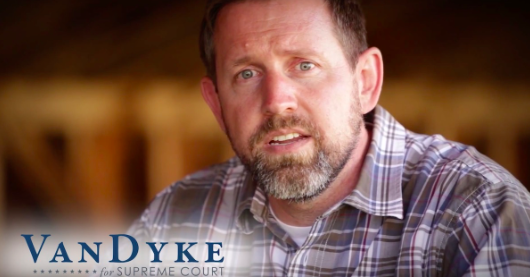 Although the Democrats savaged him and the American Bar Association called him “arrogant, lazy, an ideologue, and lacking in knowledge of the day-to-day practice including procedural rules,” Lawrence VanDyke was confirmed on Wednesday to the Ninth Circuit Court of Appeals, the most liberal appeals court in the nation.

Sen. Ted Cruz of Texas said the ABA “not qualified” rating for VanDyke, who has a Harvard law degree, amounted to finding the man guilty of “practicing law while conservative.” Others said the hit job on VanDyke was a drive-by shooting from the liberal elite.

VanDyke had suffered through a bitterly partisan confirmation process since his nomination was made by President Donald Trump in September.

The only Senate Republican voting against VanDyke was Sen. Susan Collins of Maine.

His confirmation means Trump has appointed nine members to the Ninth Circuit, nearly one third of the judges. Earlier this week, the Senate confirmed an openly gay prosecutor who Trump had nominated to the same court. Patrick Bumatay, who is also of Filipino origins, had a much easier confirmation process.

The Republican-led Senate is confirming plenty of judges these days, including eight last week. VanDyke brings the confirmations to 171 Trump appointments to district and circuit courts. Trump set a goal of having 183 federal judges in place by the end of 2019.

Sarah Pitlyk, who was also confirmed just last week, also received the “Not Qualified” rating from the American Bar Association.

Sen. Mike Lee of Utah has been critical of the American Bar Association’s partisan vetting process, and has asked the White House and Senate Judiciary Committee to remove the ABA from further involvement in the nomination process.

VanDyke, the former solicitor general of Montana, now has a lifetime appointment to the 29-judge panel that is the largest appeals court in the nation, covering issues that matter in the entire west, including Alaska. It is based in San Francisco and has been dominated by liberal judges for years, prompting many to call for a new court to be established for the Northwest.

Journalist who signed recall petition will work at CNN

House Majority response to budget: We don't like it