Things get chippy when Austin Baird gets tired 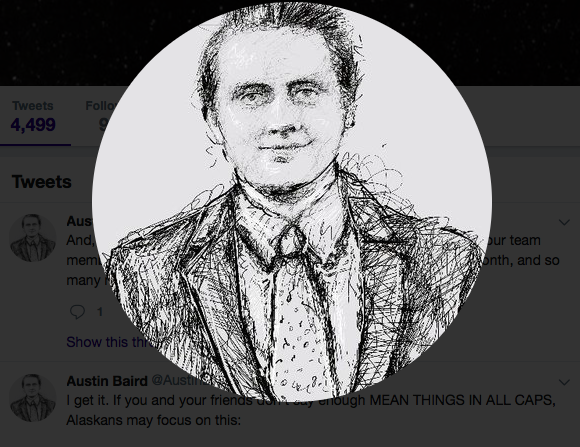 Austin Baird, the former press secretary for Gov. Walker, must be overtired. As the press secretary for the House Democrat-led Majority, he took to Twitter tonight to blast away at Minority Leader Lance Pruitt, in the most epic Twitter storm of the legislative session.

Pruitt had been quoted by the Anchorage Daily News saying he supports having a special session in the Mat-Su Valley, so that legislators can get out of the Juneau bubble. Within the Juneau bubble, everyone tells each other they’re smart and good looking, and getting out of the bubble, people tell you that you are just as dumb and ugly as before, said Pruitt. It was a glib line to illustrate that the Legislature looks different to people who are not in Juneau.

Baird, who is staff to Speaker Bryce Edgmon, was not having it. He scolded. He upbraided. He gave the House Minority leader the righteous indignation Twitter storm worthy of, dare we say, Donald Trump?

“Hey, @Rep_LancePruitt, if you can’t govern without lying to Alaska about monumental policy proposals and calling your colleagues dumb and ugly, find something else to do.”

But that wasn’t enough. Baird continued:

“I get it. If you and your friends don’t say enough MEAN THINGS IN ALL CAPS, Alaskans may focus on this:

“Your budget would fire teachers.

“Double tuition at the university in your district.

But wait, there’s more from PR guy Baird, whose former boss Gov. Walker actually cut the Permanent Fund dividend in half and made it, for the first time in Alaska history, a political calculation.

“And, Alaskans might even notice that you sat quietly when one of your team members opposed Black History Month, Alaska Native Heritage Month, and so many more things than I can fit in a single tweet.”

Things must not be going well in the Majority for them to have lost control of their press secretary like this. Bad form.