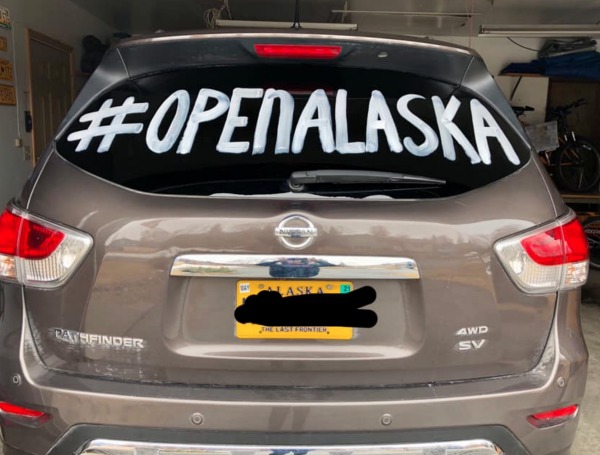 Several hundred Alaskans are saying they’ll be taking part in a “rolling rally” on Wednesday from noon to 2 pm to protest the extended government closure of Alaska businesses.

Organizers are members of a Facebook group called Open Alaska, where within just a few days over 3,200 people have joined. Many express dissatisfaction with the draconian measures taken by Mayor Ethan Berkowitz that have led to such policies as:

On Wednesday, the ad hoc group will gather at the Loussac Library at noon and drive from midtown to downtown. The route is still being determined but will go along Fifth Avenue to L Street, back on Sixth Avenue and then along Seventh Avenue. Some participants said they will roll through the downtown route for two hours. Organizers have made it clear that all participants should follow all traffic laws and signage.

In an interview with radio host Hugh Hewitt, A.G. Barr said the burdens on civil liberties appear too great in some cases, and that if someone sued a state over hunker-down orders, the Justice Department would side with the citizens.

“The idea that you have to stay in your house is disturbingly close to house arrest. I’m not saying it wasn’t justified. I’m not saying in some places it might still be justified. But it’s very onerous, as is shutting down your livelihood,” Barr said.