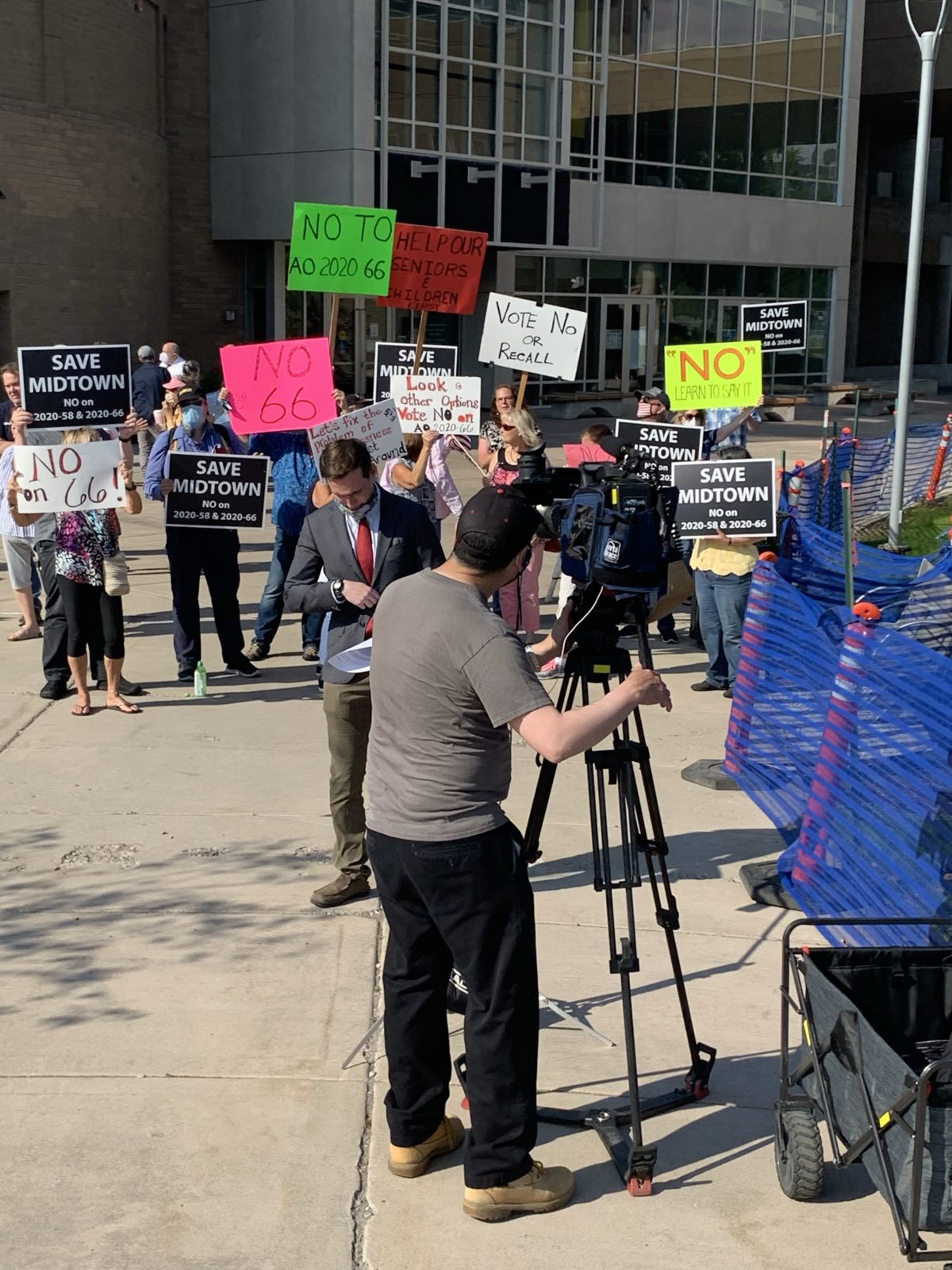 BUT HAS MAYOR ALREADY SIGNED CONTRACT TO BUY GOLDEN LION?

The band of protesters cheered when an unmasked Assembly Member Jamie Allard pf Eagle River arrived at the Loussac Library for the special meeting of the Anchorage Assembly on Monday.

They booed when Mayor Ethan Berkowitz arrived, masked and ready for battle.

And they chanted “Vote No” when the other members of the Anchorage Assembly scurried by in masks to go into the building that the public was not allowed to enter — by order of the mayor.

One by one, six of the Assembly members filed into the chamber out of sight of the protesters.

In that empty chamber, they discussed for five hours Mayor Berkowitz’ plan to establish a web of services for vagrants throughout Anchorage, including shelters in family neighborhoods and drop-in day service centers close to schools where children are present daily.

About 70 citizens with signs and fighting spirit showed up at the library where the Assembly Chambers are located to express their displeasure with a set of ordinances that would use various pots of money to serve the vagrant population in Anchorage.

The money would come from federal CARES Act money, from the sale of Municipal Light & Power to Chugach Electric, and from the new alcohol tax that voters passed this past April.

The total investment includes purchasing four buildings in different neighborhoods, renovating, remodeling, and then establishing various services for the people who sleep on the streets, in doorways, and in encampments in the woods of Anchorage.

After five days of public testimony, Monday night’s discussion of the mayor’s plan went on for another five hours, as Berkowitz’ Chief of Staff Jason Bockenstedt answered questions from Assembly members. His slide presentation was 66 pages long.

[See Mayor Berkowitz’ slide deck on the vagrant plan at this link.]

Assemblyman John Weddleton tried to pull the Golden Lion Hotel on 36th Avenue and New Seward Highway out of the package. That failed 7-3. But Must Read Alaska has learned the Mayor’s Office has already signed a contract with the Golden Lion to purchase that building for $9 million. The Assembly, which is the appropriating body, does not seem to be aware of this. Update: Another source close to the matter says no contract has been signed.

Weddleton eventually said it was clear from the public testimony “…Public has lost confidence in us.”

That’s when Allard asked for a point of order, to ask Rivera explain why one person was allowed in the chambers, when other people were not allowed.

Assembly member Forrest Dunbar then snapped back at Allard that he thought property was available in Eagle River for a homeless center on Yosemite Drive, across from the Eagle River High School. He was threatening her. Allard didn’t back down; she told Dunbar he should be more worried about his military career.

Late in the evening, the Assembly majority laid on the table an information memorandum that contained the over 700 pages of public testimony. When an item is “laid on the table” means it is not published on the agenda, which makes it harder for the public to access.

In the end, the clock struck midnight and the decision on the vagrant plan was postponed until Aug. 11. The regular Assembly meeting tonight has a host of other controversial items on the agenda, including a ban on any therapies to help young people overcome their homosexual, transexual, or other gender-related behaviors.