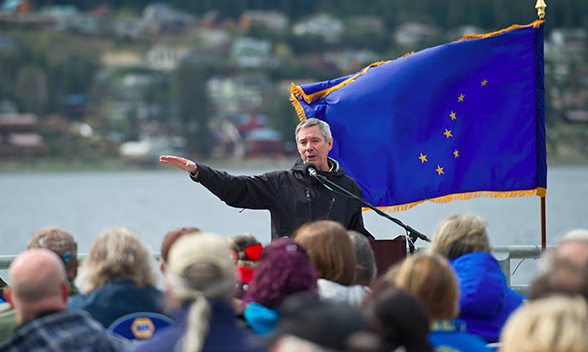 John Binkley announced he is retiring from his role as president of the Cruise Line International Association of Alaska.

Binkley, who ran for governor the the primary in 2006 but lost in the Republican Primary to Sarah Palin, will step down effective Oct. 11, 2019 from the role he has had since he started the association in 2007.

During his time as president he grew the the advocacy group from nine to 17 member companies that bring cruise ships to Alaska, and he was active in rolling back the punitive cruise ship passenger tax that caused cruise companies to take their business elsewhere. The tax was $46, but with legislation signed by Gov. Sean Parnell, it was rolled back to $34.

The association had filed a lawsuit against the state that claimed the head tax violated two sections of the U.S. Constitution, and federal law. CLIA dropped the suit after the tax was rolled back.

The CLIA also sued the City and Borough of Juneau in 2016 because it was improperly using the head tax to erect a bronze whale on a manmade island built for the whale sculpture, and a boardwalk to and from the art project that was a long distance from the cruise ship docks. It was a $10 million project with its own fair amount of local controversy. That suit was settled when Juneau agreed to not use the taxes for non cruise ship purposes in the future.

Binkley considered running for governor in 2018 but ultimately decided to stay out of the race. His family business had purchased the Anchorage Daily News property from Alice Rogoff.

“Our goal has always been to help Alaskans gain more economic benefit from the cruise industry,” he said in a statement. “Seeing the positive impacts cruise ships have had in Alaska’s economy has been very fulfilling. New, small businesses starting up, more jobs and opportunities for Alaskans, more revenue to communities, all are very satisfying to see develop and progress.”

The Alaska Cruise Association merged into the Cruise Lines International Association in 2016. The chairman of the organization, Charlie Ball, said Binkley leaves the organization in good shape and the organization doesn’t plan to fill the position at this time.  Lalanya (Lanie) Downs and Mike Tibbles will continue as CLIA’s representatives in Alaska.

“Though his achievements are many, certainly at the center of his leadership legacy over the past year has been his ability to successfully help the industry and local communities adapt to the largest single growth season for Alaska cruising ever,” Ball said. “John and the CLIA team worked throughout the winter and spring to resolve a long-running lawsuit with Juneau, which helped establish a great foundation for future collaboration within Southeast Alaska port communities.”

In his role back in the family business, Binkley will report to his son, Ryan Binkley, CEO of their various statewide family businesses and publisher of the Anchorage Daily News. He is focusing on projects in Southeast Alaska, working closely with partners Ward Cove Group on the new two-berth cruise dock in Ward Cove.

Binkley, a former member of the Alaska House of Representatives and Alaska Senate, was born and raised in Fairbanks and is a third-generation Alaskan whose grandfather arrived in the territory during the 1898 Gold Rush as a riverboat pilot.

In 1950, his parents started a small tour business in Interior Alaska, hosting visitors aboard the Riverboat Discovery. Binkley was born into the business and grew up in the visitor industry, seeing firsthand the growth of the industry from the 1950s to the 1980s, when cruise ships started coming to Alaska on a regular schedule.

In 1977, John and his wife, Judy, moved to Bethel, where they started Northwest Navigation, which hauled freight on the Yukon and Kuskokwim Rivers. He started his public service career as a member of the Bethel City Council from 1982 to 1985 and then successfully ran for House and then Senate, representing the large rural district with 74 villages.

John served as chairman and CEO of the Riverboat Discovery for 14 years and as president of the El Dorado Gold Mine for 12 years.

He was chairman of the Alaska Railroad Corporation for 13 years, and he continues to serve on the AKRR Board of Directors. He also serves on many other corporate and nonprofit boards around the state.