How safe is that marijuana? Leaked audio raises doubts 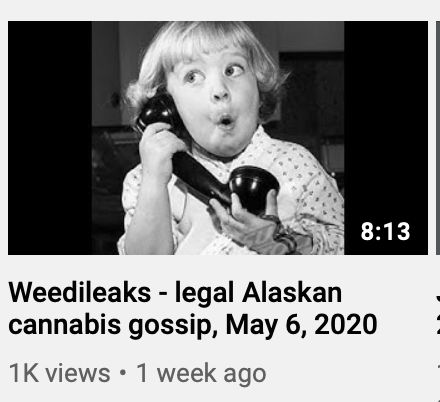 An audio recording of a detailed phone conversation between two people in the Alaska marijuana industry surfaced on YouTube this week, posted by an account that goes by the name of “Bobb Dogg.”

In the audio, a person who appears to be a manager of one of Anchorage’s largest marijuana stores admits that his company sold 100 pounds of possibly moldy marijuana, and that CBD oil that was supposed to have a low psychoactive level of THC was found to, in fact, contain high amounts.

The conversation cannot be confirmed as legitimate, and could even be business espionage, but it has raised an eyebrow over at the Alaska Marijuana Control Board, which has opened an inquiry, Must Read Alaska has learned.

In the 8-minute, 13-second audio, an astonished interviewer named “Keisha” asks “Jordan” to explain how the company got around testing of the 100 pounds of possibly contaminated pot, which according to Jordan came with the acquisition of another marijuana business on King Street. Jordan said managers knew the product was contaminated. Jordan insisted to Keisha that he followed orders to sell the product, and to sample portions of it that did not appear to be contaminated to send in for testing.

If the allegations are true, it’s a glimpse into how marijuana purveyors may cut corners to capture profit, possibly at the expense of their customers’ health.

Must Read Alaska has forwarded the audio to the Marijuana Control Board. More than 1,000 viewers have seen the video, and some commenters noted that they’ve known about the incident for a while and have chimed in on the comment section with remarkable specificity about how the moldy cannabis made its way to market.

The company in question is owned by a variety of people, a few of whom are well known in liberal politics and media, some with powerful connections to the mayor’s office.

The video can be viewed by searching for Bobb Dogg on YouTube. The audio is labeled “Weedileaks.” Whether it’s valid is certainly a question, and it is only one side of what appears to be a very serious allegation. The retail value for 100 pounds of marijuana can vary widely, but could be worth $100,000.

Such a matter would probably be taken up at the next meeting of the Alaska Marijuana Control Board, scheduled for June 10-11, but likely would be taken up in executive session, if there is indeed an investigation underway.

The doctor is in: 100 days until Charlotte and the Republican convention