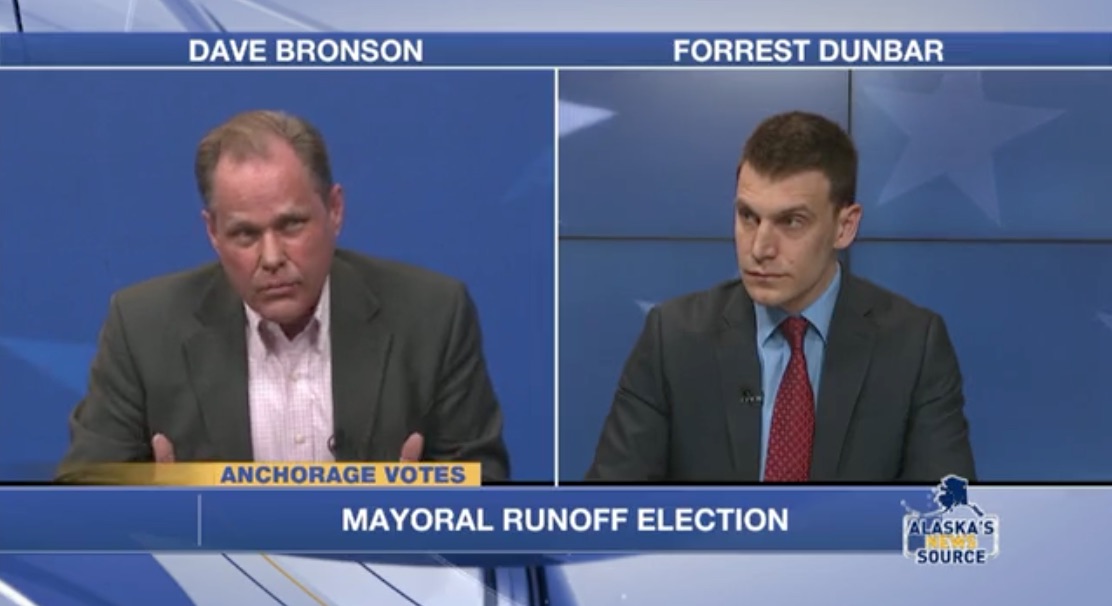 Dave Bronson, running for Anchorage mayor, found he was debating both his opponent Forrest Dunbar and moderator Rebecca Palsha, as the KTUU-Alaska’s News Source “conversation” devolved into an argument between a “wise dad” and an “angry teen” Wednesday.

The debate contrasted the styles and perspectives of two who would lead Anchorage over the next three years. Bronson described himself as a blue-collar worker, commercial pilot, military guy, and a leader who would set Anchorage on a better path. The runoff election is underway, with ballots in mailboxes and a deadline of May 11 to get them into drop boxes.

[Read: Many don’t know there’s a runoff election for mayor]

Dunbar badgered Bronson for having campaign get-togethers without masks, and promoted his own accomplishments as an Assemblyman for the city. Dunbar became increasingly agitated, and the longer the debate went, the faster he spoke and the more frustrated he appeared.

Asked how he would have handled the pandemic differently, Bronson said he would have stuck with the original plan of social distancing to not allow the case rates to exceed the medical community’s ability to deal with it, pointing to the number of ICU beds as a barometer.

Bronson explained that at first the policy goal of the mayor had been to “flatten the curve. But over the summer, the rules changed.”

Of the handling of the epidemic in Anchorage, Bronson continued: “We have shut down businesses, we’ve destroyed lives. We’ve shut down our churches and our schools,” Bronson said. “I’ve never seen a community in worse shape than this community.”

Dunbar, however, defended the municipality’s policy, saying the pandemic was a first in history.

“This was a once in a lifetime event, a pandemic unlike anything we had ever seen before. It was a deadly and dangerous virus and it still is. The good news is that the people of Anchorage, for the most part, came together to do the right thing. People social distanced. People wore masks. People worked together to try to prevent the spread of this infection and because of that Anchorage had some of the lowest levels of hospitalizations and deaths for a city our size in the country.”

Dunbar admitted that the municipality had made mistakes that prevented the reopening of schools in the fall. He did not elaborate on those mistakes but said “then we worked very hard, particularly in December to get schools open, to get churches open, to get businesses open.”

That was not true. He fought opening the city in December. Must Read Alaska has the video.

Dunbar said that “Anchorage is now basically down to a mask mandate only.” That happened this week during an Assembly meeting, when his campaign ally Assemblyman Chris Constant moved to remove nearly all edicts governing businesses in Anchorage. It was seen by critics as a gesture to save Dunbar’s campaign.

Bronson, throwing a punch of his own, said, “You’ve used your experience to destroy the city.”

As for Dunbar’s 10-point plan to rebuild the city, Bronson replied that the real 10-point plan needed is to get 10 new leaders at the city — 9 on the Assembly and a new mayor.

Moderator Rebecca Palsha threw softball questions at Dunbar and saved her hardballs for Bronson, and she and co-moderator Mike Ross remained mute while Dunbar interrupted Bronson repeatedly and then would not yield the mic.

Throughout the evening, Dunbar became more and more agitated. When asked why he wasn’t endorsed by the police union, Dunbar was visibly angry. He called Bronson a liar several times, and Palsha and Ross allowed it. But at once point Bronson said, “You don’t have the sense God gave an anvil.”

Dunbar finally lost his composure at the end of the debate, when Bronson explained that Dunbar’s statements about the U.S. Constitution were what finally drove Bronson to file for mayor.

Dunbar interrupted him, “I did not say that. I didn’t say that.” Dave replied, “We have the video.” Must Read Alaska‘s YouTube channel, in fact, captured that video from a meeting last summer, when Dunbar was describing the racist origins of America and how our constitutional law is based on racist policy. Roll tape: