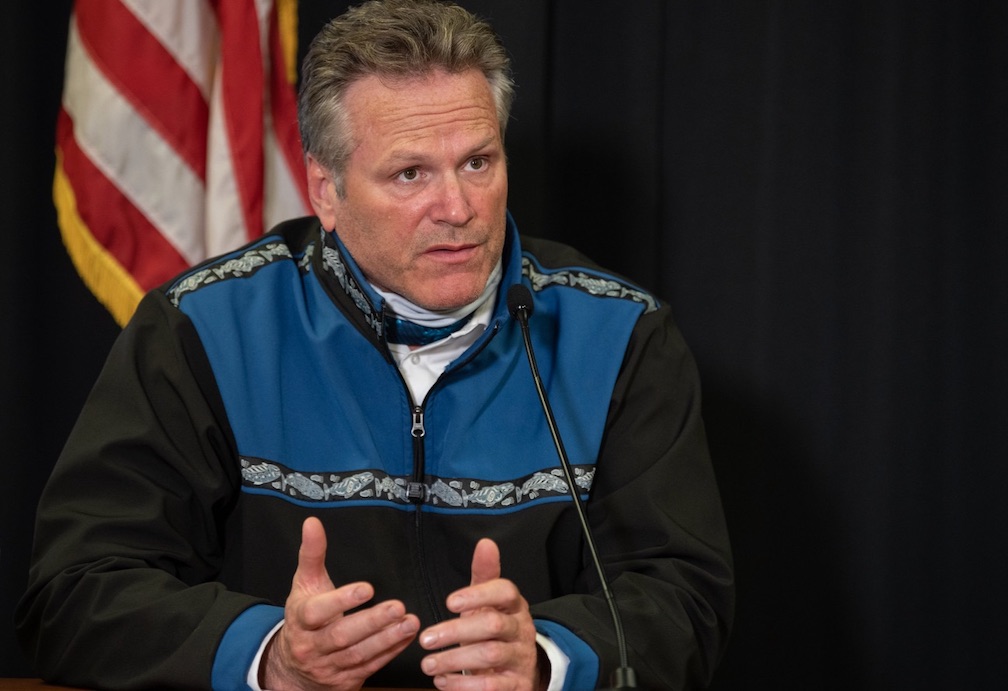 After months of virtual silence over major controversial issues facing Alaska, Gov. Michael Dunleavy finally came out from his basement. Dunleavy had put away and stored for safe keeping his bully pulpit, coincidently, at about the same time the recall effort targeting him surfaced.

Yet the pressure on the absent governor must have grown so intense he decided to come out of hiding.

What might have been the final straw is when Elizabeth Welsh, the founder of the widely popular and formidable Facebook group, Open Alaska, posted this on Wednesday:

“Where is Dunleavy? Wake up! Anchorage is in turmoil and he is silent? Write him and call him today. Tell him to end emergency powers. And travel restrictions. Speak to Anchorage. Stand up for them. Keep the assembly accountable for the CARES act money. This hands-off approach is not standing tall for half of Alaska. The travel restrictions are crippling 1/3 of our industry. Villages in long term care facilities are prisons. He likes to say we’re open, but we are not open. “

Open Alaska’s 7,000 plus members are the heart and soul of Dunleavy’s base. They frequently post their frustration over Dunleavy’s sheepishness and reluctance to take on Anchorage Mayor Ethan Berkowitz and his hard Left, rubber-stamp majority enablers on the Assembly. Welsh’s grass roots post must have scared the fear out of Dunleavy and pushed him to act.

Dunleavy was wise to heed the call of a homeschool mom with no experience in politics who has galvanized, energized, and motivated 7,000 plus people around an issue.

Back in August, Anchorage Assembly member Jamie Allard, who is always courageous and Trump-like, also called out Dunleavy for remaining silent on the tyranny run rampant in Alaska’s most populated city.

“Some folks believe you can lead from the rear which we know is not true. I prefer to lead from the front,” Allard said in August. “I can’t speak for the governor, I can only say what I would do and yeah, I wish he would have taken action a lot sooner.”

Conservative firebrand Bernadette Wilson has been very outspoken on the governor’s silence. She, too, would like to see Dunleavy do more.

“Thousands of Alaskans have been left to battle their government on their own. They’ve sent hundreds of emails and spent thousands of hours attempting to educate themselves regarding the truth about COVID,” said Wilson. “They’ve testified on numerous occasions and have been left out in the cold for countless hours outside Assembly chambers with no one but themselves because Gov. Dunleavy refuses to take a hard line with the municipality of Anchorage and stand with the citizens. I would argue there are things the governor could do to help. At the bare minimum he needs to speak up and be just as vocal as the rest of us have and from the position of someone that has far more influence and reach. We have been standing tall. It’s time for the governor to stand with us.”

I, too, have been hounding the governor over his silence on Berkowitz’s tyranny and Dunleavy’s refusal to take a stand on Ballot Measure 1 & 2.

Wednesday evening, I received a request from Stieren asking if the governor could appear on my show Thursday morning. Stieren added via Facebook message: “He’s breaking news on your show regarding the ballot measures. He’s coming out as a no on both. So, you win.”

You can hear my conversation with the governor regarding Ballot Measures 1 & 2 by clicking on the links below.

I also confronted Dunleavy on why he’s remained silent as Berkowitz has destroyed Anchorage’s private sector.

You can hear that conversation by clicking here.

Some argue there’s nothing the governor could do about Berkowitz’s tyranny, at least not legally. Therefore, Dunleavy would be wasting his time calling the mayor out for ruining the city’s economy using COVID-19 as an excuse.

But President Trump has been very vocal in calling out Democrat-run cities where mayors have allowed rioting and looting to go unchallenged.

This is a new age where Leftists like Berkowitz and the majority on the Anchorage Assembly are so radical, dangerous, and destructive, it’s incumbent on all of us to call them out.

Whether it be Welsh, Allard, Wilson, or even “Big Mike.”

Dan Fagan hosts the number one rated morning drive radio show in Alaska on Newsradio 650 KENI. He splits his time between Anchorage and New Orleans.