Another poll showing Dunleavy way ahead 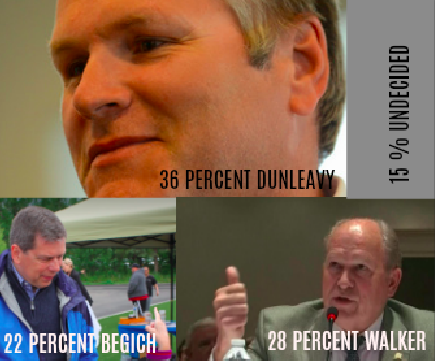 WALKER POLL: ‘MY NUMBER IS BIGGER THAN YOUR NUMBER’

Mark Begich and Gov. Bill Walker don’t agree on much these days as they vie for the title of Governor of Alaska, but they finally agree on one thing: Mike Dunleavy is still leading the race for governor.

Begich put out a poll last week that said he is “number 2” with voters, after Dunleavy. Walker is “number 3.” The poll was paid for by the Alaska Correctional Officers Association, and conducted by Ivan Moore.

Now Walker has countered with a new poll by Patinkin Research out of Portland that says Walker, in fact , is “number 2” and Begich is “number 3”. Earlier this year, Patinkin said Walker was way ahead — with 40 percent of potential voters to Dunleavy’s 17 percent.

“Right now, they’re playing a game of chicken,” said a political strategist familiar with the races. “Begich and Walker each want the other to get out of the race. They can’t win in a three-way.”

Earlier this year, Gov. Walker’s campaign manager John-Henry Heckendorn told a reporter that he “likes a head-to-head match with Dunleavy.”

That was before Begich got in the race.

Begich, a high school graduate, is challenging Doctorate of Jurisprudence Walker for the “progressive vote,” and they’re both trying to get into each other’s heads with dueling polls, which they release with campaign donation solicitations.

Begich and Walker are both millionaires who could self-fund their races, but both are increasing their criticism of Dunleavy for having an independent expenditure group working on his behalf, something neither of the other candidates have. Dunleavy is, according to his financial filings, not in the same financial league as Begich and Walker, but he has a brother who has supported his campaign.

Like the Patinkin poll done for Walker earlier this year, the Begich camp released a wintertime poll showing he would beat Dunleavy, 53-42 in a two-way.

But here’s the rub: Begich and Walker have stopped talking two-way, and have begun to release only three-way polling results.

The poll numbers released by the Walker camp today said that with Begich in the mix, Dunleavy is still ahead, with 36 percent of the vote.

Heckendorn, who went on the state payroll as a top aide to Walker for a year before jumping out of state service to become his campaign manager, wrote a letter to the Walker base of supporters today intended to strengthen their spines in the final four weeks before primary voting begins. He said:

“At the end of June we concluded a baseline survey of 800 likely voters around the state. There is no question that we are in a dogfight. This most recent poll showed prospective Republican nominees Dunleavy/Meyer at 36%, Independents Walker/Mallott at 28%, and Democrats Begich/Call at 22%, with 15% of voters still undecided.

“A three-way race was always going to be complicated, our political system is not designed for general election races with more than two well-known, well-funded candidates. But we have a lot of reason for optimism:

The message that voters are receiving from this Walker campaign donation might be different from the one Heckendorn intends.

The last poll conducted by Dunleavy for Alaska showed Dunleavy is beating Walker, 47-41 percent in a head-to-head.