After Medicaid expansion: Alaskans are failing the health test

(3-minute read) HUNDREDS OF MILLIONS OF DOLLARS, NOT MUCH YET TO SHOW

Alaskans are surviving cancer better, are slapping each other less, and are quitting smoking.

But according to the Healthy Alaska Scorecard update from the Alaska Department of Health and Social Services, there’s a lot of work ahead to get Alaskans’ health on track.

We’re still too fat, we drink too much, and we’re couch potatoes. Plus, too many of us kill ourselves.

Those are just a few of the findings released last week by the department. Commissioner Adam Crum said that while there are some improvements, there are plenty of health indicators not worthy of bragging rights.

The data compares baseline information in over 25 health indicator categories from 2010 to the years 2017 and 2018. There are a couple of indicators only updated as far as 2016.

Only one of the categories is considered “on track” — meaning it’s meeting the expectation of the department for progress. That is the increase in the percentage of rural community housing units with water and sewer services. In Alaskan terms, this means running water and no honey buckets.

But as for accessing a doctor, progress has been slight, in spite of the billions of dollars spent to expand Medicaid to working adults without children.

In 2017, 13.6 percent said they could not afford to see a doctor, compared with the baseline rate of 14.7 percent from years earlier. DHSS claims progress in this area — progress of 1 percent.

For Alaska Natives, there’s been more progress in access to doctors. The percentage of that population who could not afford to see a doctor went from 13.2 in 2010 down to 11 percent in 2017.

The number of Alaskans admitted to hospitals for cases that could have been prevented with high-quality preventative care (based on industry definitions) was also lackluster. It was 7.1 percent in 2010, but rose to 7.3 percent in 2017. Medicaid was supposed to fix the problem of hospital emergency admissions due to lack of access to a doctor.

On the other hand, binge drinking is down in both underage drinkers and those of legal age.

View the chart with all 25 health measurement scores here.

A population subset that has benefited most from Medicaid expansion is Alaska Natives. Some improvements in health care access are noted in a separate report, such as access to prenatal care during the first trimester of pregnancy, which saw a 4 percent improvement. 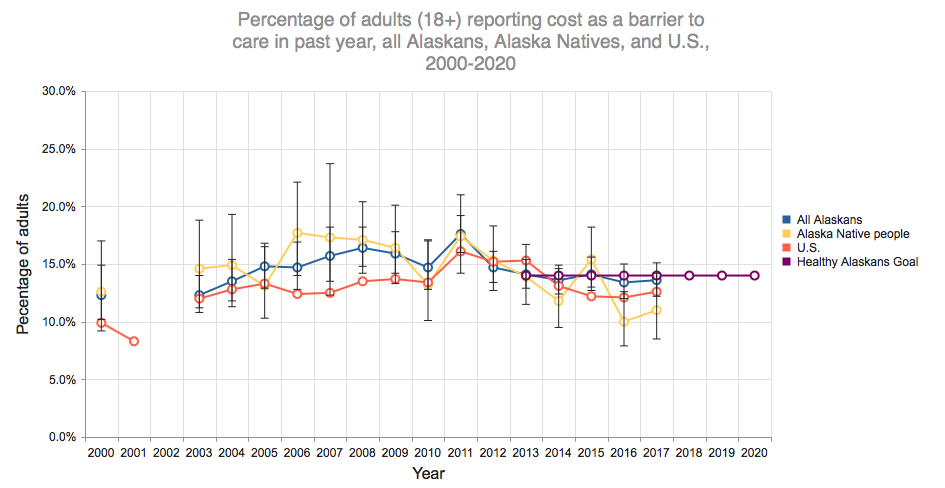 Cigarette use is also down among Natives, as it is in the general population. The percentage of high schoolers who don’t smoke went from 59.2 percent to over 70.9 percent in the time between 2010 and 2017.

Cancer mortality is down.

The “Native only” chart shows no data at all for the number of rapes among that population. Neither does it show the reported rate of child maltreatment.

But in the overall population report for Natives and non-Natives, these numbers have worsened. (Note: this can be skewed because of a reduction in stigma in telling someone what happened leads to more reporting of these crimes.)

View the scorecard with the Alaska Native health outcomes here.

The state’s Medicaid program is an open checkbook. Those enrolled will have their health care paid for by the state and federal governments without a cap, which allows the program to continue to expand, and always come back for supplemental funding.

During last year’s Senate Finance Committee hearings, both Sens. Anna MacKinnon and Peter Micciche expressed grave concern that the costs were exploding after they received a supplemental request from the Walker Administration of $170 million for the 2019 budget.

“When Medicaid was expanded, it was expanded with a set of assumptions that were simply incorrect,” Micciche said at the time. “There has to be a point where we have a bottom line of understanding what the end result is going to be. I mean, it is literally an open checkbook.”

Gov. Michael Dunleavy’s 2020 budget, due on Feb. 13, will likely have a different approach to what his administration has inherited, a health care system with not enough effective limits in spending and a substantial amount of fraud.

Some costs for Medicaid have started to flatten since SB 74 was passed in 2016. To read the most recent report to the Legislature on cost-avoidance measures that have resulted from the recent Medicaid reform bill, check this link.

Who's doing the vetting?