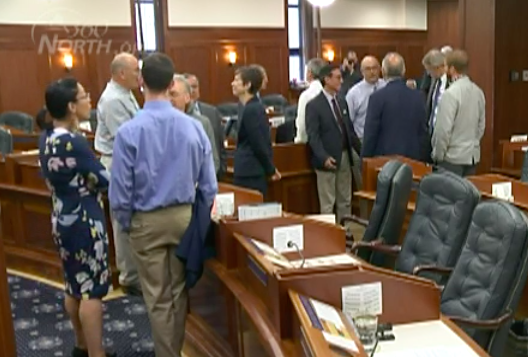 With just 24 hours to go to override the governor’s vetoes, the two-thirds of the legislature that is in Juneau is trying to figure out a last-ditch effort to restore $440 million in government spending through veto overrides.

They didn’t have enough people in the room to succeed, however, even if everyone voted to override.

During their floor speeches about the operating budget in Thursday’s joint session, their speaking tones were not quite as defiant as on Wednesday. They pleaded. They begged their colleagues in Wasilla to join them.

Only Sen. David Wilson of Wasilla had heeded the call to come to Juneau, and they all knew he was a no vote on an override.

They were in the process of suffering from a humiliating defeat by the more conservative legislators — the “Thrifty One-Third” who have sided with Gov. Michael Dunleavy’s call for the second Special Session to be held in Wasilla.

Sen. John Coghill expressed sadness. His community of Fairbanks will take a major hit when the University of Alaska restructures to adapt to a $135 million cut. The university of one of the three pillars of the Fairbanks economy, he said, along with mining and military. He cautioned that many small businesses that exist because of the university employment base will go belly up.

Sen. Tom Begich’s voice broke as he talked about losing the state he loves. He reminisced about working as a legislative aide during the days when the oil money flowed and spending was reckless.

Rep. Andy Josephson said he would fight on until his last breath:

“This ship will be righted or I will die trying. We will do everything we can through every mechanism before us,” Josephson said. He said he thought all the people who want a full PFD will probably get in their Winnebagos and leave the state if they don’t get them.

Rep. Chuck Kopp called on all to compromise, but seemed to especially want the governor to compromise, likening the Legislature to a lighthouse — immovable — and the governor to a battleship that had better change course. At least that was how the analogy was delivered, although Kopp may have meant something different.

Rep. Bryce Edgmon withdrew his motion to rescind the vote from Wednesday that failed to override the operating budget vetoes. To vote again was futile. He spoke in conciliatory terms at the end of today’s joint floor session, saying that all sides need to work together.

Session adjourned at 12:25 pm on Thursday as rumors flew through political circles about how Friday would play out, with a noon deadline for veto overrides looming: Would legislators in Juneau get on a plane and come north?

Or will legislators in Wasilla fly south so that at least the capital budget veto override motion, offered today by Sen. Lyman Hoffman, can be voted on.