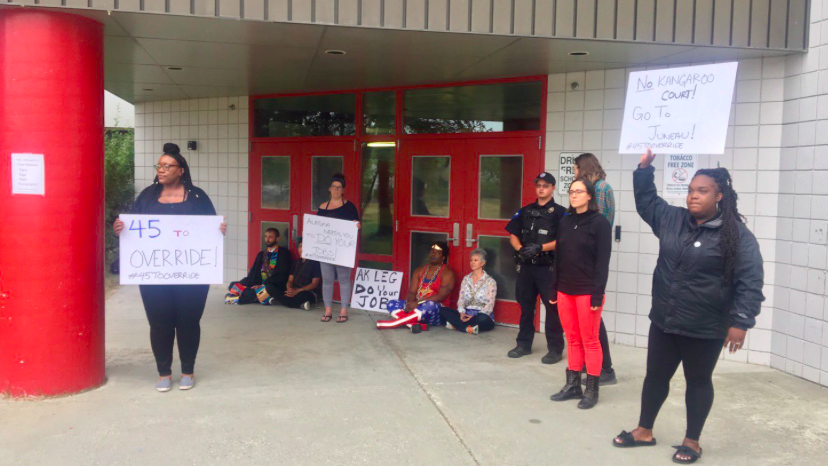 Legislators in Juneau have been actively explaining themselves to the public and their voters about where they stand on the governor’s budget vetoes and why they oppose them.

On the floor of the joint House and Senate, Rep. Steve Thompson described his feelings this way: “We’re mad as hell and we’re not going to take it anymore!”

He may have been paraphrasing a movie script from the 1996 movie “Network.”

But Thompson was also channeling the anger of the anarchist-led mob who took over a legal meeting of legislators that was being held in Wasilla at the same time.

No legislator in Juneau has yet condemned the takeover of the Wasilla meeting by the radical, screaming mob that came from other communities to occupy a legally assembled Wasilla legislative meeting.

“We will keep fighting until this assault on our economy and state ends … but our efforts will only succeed if everyone disturbed by these reckless cuts continues to raise their voice,” the House Democrat-led Majority wrote.

The Senate President today issued a long explanation of why she supports a veto override, and she, too, made no mention of the “Occupy” group that illegally invaded the Wasilla meeting — a meeting she does not recognize as legitimate.

Her words are newsworthy and deserve wider readership. Here’s Giessel’s letter in full:

On Wednesday, July 10th, the House and Senate met together in order to consider overrides to the Governor’s vetoes of the Operating Budget. That override was not successful.

Alaska has, in its Constitution, the highest requirement for a veto override vote of items struck from a budget- ¾ of the Legislature need to vote in order to undo the actions of a governor. All other states require 2/3, 3/5 or simple majority.

We did not have 45 legislators present for the vote. The missing members equate to a NO vote on the override. That means the override was not attainable.

We have recessed the joint session until today. We are hopeful that the missing legislators will decide to come to Juneau to participate in this critical vote.

The Finance committees have been meeting. One of the missing Senators called in to participate in the Senate Finance meeting on Tuesday morning. Clearly, Senators understand that the work being done in Juneau is legitimate and urgent for the state.

There are 3 branches of government – Executive, Judicial and Legislative. James Madison, in the Federalist Papers, noted that the most powerful branch is the Legislative. His reason? The Legislative branch is elected by small groups of people, and so it is therefore closest to the people. The Legislator brings the voices of each smaller area into the larger discussion of what should become law.

Legislators represent the diverse opinions of people across our state. The 40 Representatives and 20 Senators are different. With all the different life experiences, professions, families and cultural backgrounds, hailing from communities in the Arctic, in the temperate rainforest, in the tundra, and in the Pacific swept island chains, how could we not be different?

When you see big divides in the Legislature, understand that this represents a multitude of opinions across our state. An example of this is seen in the contrasting views on the budget and the Permanent Fund Dividend.

Operating Budget – The Legislature held lengthy meetings, full of debate and disagreement. At the end, we constructed a budget that reduced spending back to 2004 levels of unrestricted general funds, resulting in the largest real education in state history. At the same time, legislators worked cooperatively with organizations affected to negotiate reductions. The reductions were about $250 million. The Senate voted unanimously on that budget.

Operating Budget Now – The Governor made reductions of $444 million more, above and beyond what the Legislature has done collaboratively as 60 lawmakers. We now face destruction of key parts of the state’s economy.

Mental Health Budget – This budget is never controversial…until this year. The Governor has vetoed some of the funds in this budget as well.

University – The University of Alaska is a key research facility. It is known, world-wide, for Arctic research. The U.S. is an Arctic nation because of Alaska.

Yet, the U.S. government has little expertise on Arctic topics outside of the work pioneered by UA. The University prepares our professional workforces. In fact, the presence of the University was one of the reasons that the military decided to deploy fighter jets here.

I am asked if I am a fiscal conservative who wants to reduce the size of government. The answer is yes; just ask the many folks who criticized me for most of my time in the Legislature for being a “rabid right winger” on fiscal issues. I voted for a fiscally conservative budget in the Operating Budget this year. The Legislature performed careful surgery. The vetoes are reckless amputations.

As I presided over the Joint Session, I could see each legislator’s face as they spoke about the impact of the various vetoes. Many strong men and  women had to fight back tears as they spoke about the damage caused by cuts that undermine their communities. These lawmakers were seeing the faces of the men, women, and families in their districts. They were envisioning their neighborhood streets with ‘For Sale’ signs in front of homes and ‘Closed’ signs on businesses. It was heart-felt grief for our Alaskans and our economy that drove those remarks on the floor yesterday.

Some people think Legislators are aloof, wealthy, detached elites. Fake news!!! We are Alaskans, citizens just like all of you. We worked hard to meet the need to reduce spending without creating mortal injury to our families, businesses and jobs. We came together, as Alaskans of different backgrounds, in this Special Session, to repair Alaska from the impacts of these vetoes. Sadly, 22 of our colleagues didn’t share the same level of concern.

We have made allowance for our absent colleagues. There is a motion to pull back the failed vote to override and return to the Joint Session on Thursday to vote again.

The time for that last vote will be at 10:30 AM. This allows our absent colleagues to arrive in Juneau and get to the Capitol. There was a flight last night available, or they could come down on this morning’s early flight. We are offering them every opportunity possible to do the right thing for Alaskans.