The Mayor of Valdez is distraught with Gov. Michael Dunleavy’s budget proposal, believing the State’s $1.6 billion fiscal gap can be fixed if the governor would simply resign.

In a caustic missive posted on Mayor Jeremy O’Neil’s Facebook page on Saturday, the official from Valdez called the Dunleavy budget a “lesson in fiscal tyranny, malpractice and folly.”

Alaska’s most recent governor was from Valdez, and was popular in the wealthy oil terminal town, where the average household income is more than $90,000.

O’Neil, who was a big Bill Walker supporter over the years, is still nursing a wound from Walker’s devastating loss in 2018, when he only got 2 percent of the vote statewide, and fewer than 50 votes from his hometown in Prince William Sound, which was one of his strongholds.

O’Neil’s letter is a cannon shot from Valdez over Gov. Dunleavy’s bow, yet it’s unclear if he’s speaking in his official capacity on behalf of the whole city, or as an unelected Alaskan.

“Never in my wildest dreams could I have imagined a more paternalistic, uninspired or destructive response, from our State’s highest official,” O’Neil wrote.

“My own family has weathered the economic ups and downs in this State over several generations, and it goes without saying that stewardship at the State level has brought us to the crossroads we find ourselves today. I appreciate and sympathize with the difficult fiscal road ahead of us. Nevertheless, your proposal turns Alaskans against each other, picks massive winners and losers, and turns the hard-fought gains of over 50 years of statehood into an ash heap of lost time and opportunities. Yours is a lesson in fiscal tyranny, malpractice and folly.

“You campaigned on a platform of little details and massive promises. A child’s story speaks of a village with a huge rat problem. One day a “savior” came to town with a solution to solve their infestation. We know, as that story goes, when the Pied Piper was dissatisfied with his compensation, he ran off with the village’s most precious asset, their children. I’m struggling to see how your vision of the future is not paralleled by the moral of the Pied Piper’s story. In legal circles we call this fraud in the inducement. Many of my close friends and family chose to, “vote you in, to figure out what you’re all about,” and now that we know, it’s time for you to go.

“The nightmare proposal of SB 57 is a State power grab, wrapped in a malignant cost shift, wrapped in the age old government fallacy of “we know what’s good for you, better than you do.” You would expect such tactics from extremists who ultimately turn their citizens into beggars. Mr. Dunleavy, never in the history of our state has this worked. Creating a structure of massive losers to fill budget gaps, creates division, implants fear, and hurts everyone,” O’Neil wrote.

SB 57 would repeal the authority of Valdez to keep its municipal tax on the pipeline property that goes through the community. It’s doubtful that O’Neil would be so vigorous in his wrath if not for this piece of legislation.

Currently, the town of 3,862 people gets $38.4 million from taxing the Trans Alaska Pipeline, which goes through the community. That’s a tax on oil property that gives the city nearly $10,000 of services per resident.

For comparison, the City and Borough of Juneau’s budget is about $10,500 per resident. 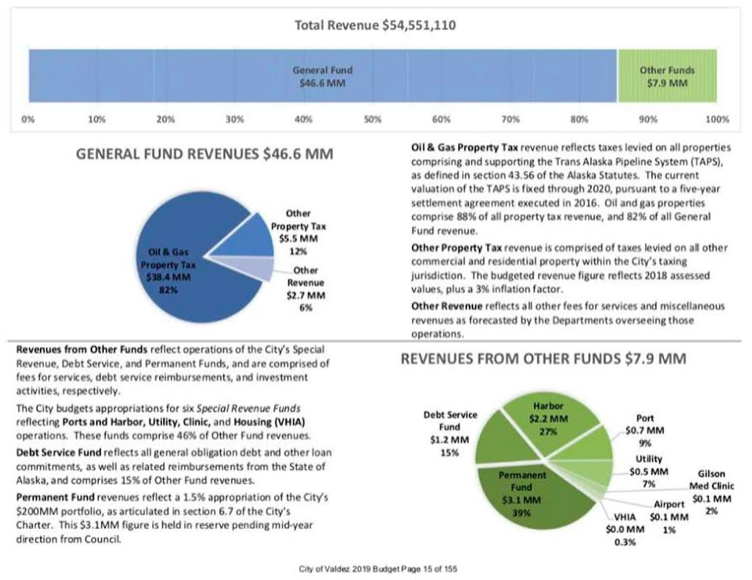 No city wants to give up its local oil tax and share it with other communities, so this will be a battle royale for communities such as Valdez and the North Slope Borough, which will fight back against SB 57, as they seek to keep taxes on pipeline properties for local uses.

O’Neil’s letter shows the passion with which communities will fight:

“Mr. Dunleavy, make no mistake, your vision hits the poor & vulnerable the hardest. I am open to change my opinion, but as of right now, I can’t bear to see anymore destruction. Please resign. Good day,” he concluded.

O’Neil is open to changing his opinion.

Bishop: 'With all due respect, ma'am, that's the wrong answer'