They’re for abortion, and they stood proud 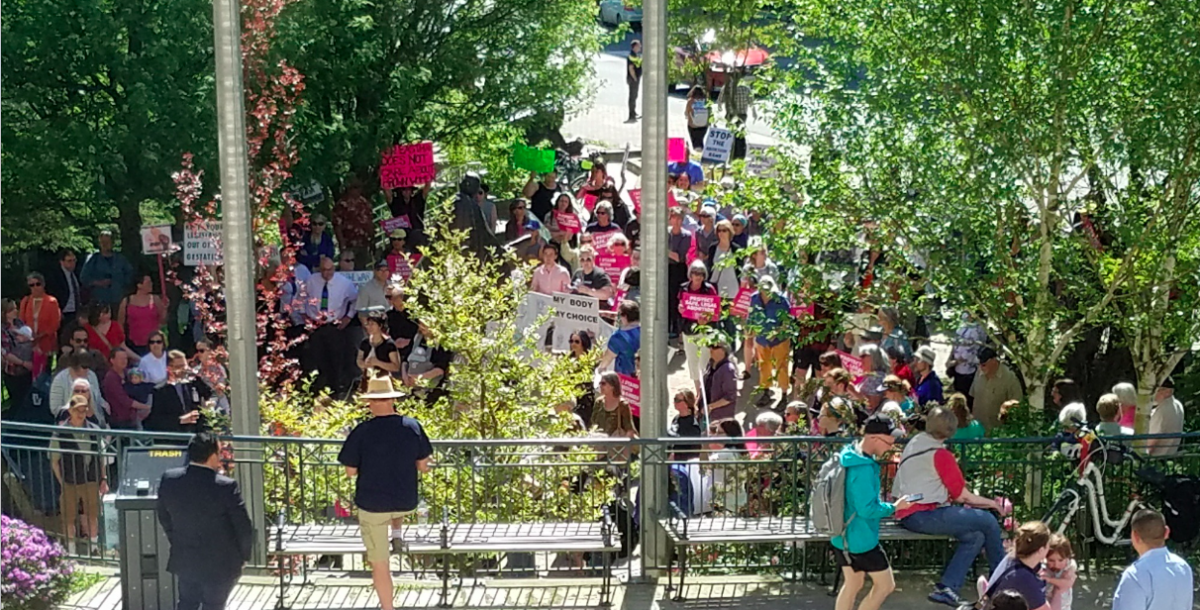 It was a beautiful Tuesday in Juneau, with five cruise ships in town, and the locals gathering at the Capitol to protest, as they do so often.

But this time they were in shorts, t-shirts, and wearing sun protection. There were no puffy jackets or rain gear. You could count the children present on one hand.

This time, they were not protesting for education funding, but protesting a bill that is likely already stillborn — Rep. David Eastman’s “Life Begins at Conception” bill, HB 178, which is the kind of bill that is introduced every year without much debate, since these bills rarely get heard.

Also known as the Abolition of Abortion Act of 2019, HB 178 would define a child as a person from conception until age 18. Killing such a child would be considered murder. Murder is a felony, even under SB 91.

But although the bill, filed during the last hours of the regular session, isn’t going anywhere, some 300 people held signs — many of them provided by Planned Parenthood — and chanted at what is these days nearly an empty Capitol building, since lawmakers are without most of their staff during this Special Session.

At the Legislative Information Office in Wasilla, a few protesters gathered for a rally as well, with the same message and on the same topic of “my body my choice,” Protests against HB 178 also took place in Anchorage and Fairbanks over the weekend.

Rep. Ivy Spohnholz of Anchorage, a staunch pro-abortion Democrat, has sworn the bill will never get a hearing in its first committee of referral, Health and Social Services, which she chairs. Rep. Bart LeBon of Fairbanks said he doesn’t support the bill; he is a Republican member of the Democrat-led caucus.

A small group of abortion protesters were also out today in Juneau, but were in the role of quiet observers.

On Monday, Eastman posted on Facebook, “‘I’m so glad I was aborted’…said no one, ever.”

'Friendly lawsuit' in the works between Legislature, governor

MRAK Almanac: Ramping up for Memorial Day weekend; who's on Denali this week?