Another protest is planned by supporters of Marvin Abbott, who has been denied the ability to attend to his daughter, now in critical care at Providence Hospital in Anchorage.

On Saturday a small group of protesters joined him, including Assembly member Jamie Allard and several members of his family, and he is expecting a much larger crowd that says it will join him Sunday from 2-4 pm.

“We don’t live in the world we see on TV people,” he says in the video, his voice breaking with emotion. “There’s been so much love and compassion.”

The Kodiak resident says he won’t leave without his daughter, and is going to camp there until the hospital lets him in to be with her.

Hospital rules say no family members can come in, unless their loved ones are on death’s doorstep.

Rachelle was medevaced on Sunday night from Kodiak, and Abbott came, too, even though he knew of the hospital policies. He said he would take a test for COVID-19. But the hospital has refused to allow him to see his daughter.

People in Alaska found out about the father’s plight after he posted a Facebook video of himself lying on the lawn near the hospital, with a sign behind him that reads, “Let me see her!”

On Sunday morning, his sleeping bag was covered in frost. He had been joined overnight by a family friend, who slept nearby in a sleeping bag on top of a cot propped on the lawn and sidewalk.

The Providence Board of Directors meets on Tuesday, but Abbott says the board could meet earlier by teleconference to change the policy.

Jab or no job: Medical workers talk about being terminated over Covid shot mandates

Redistricting board has two maps under consideration for new political boundaries 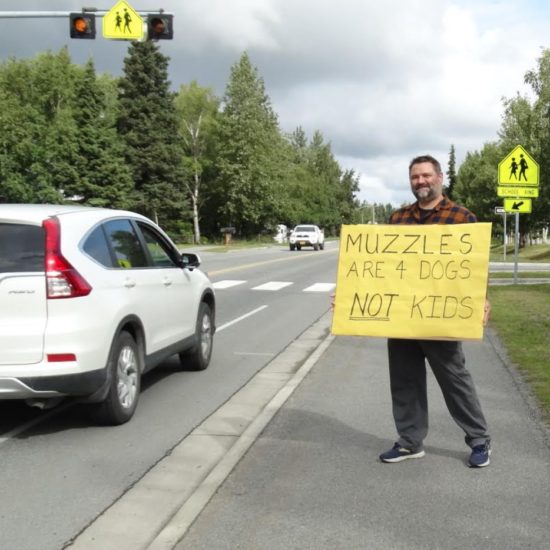