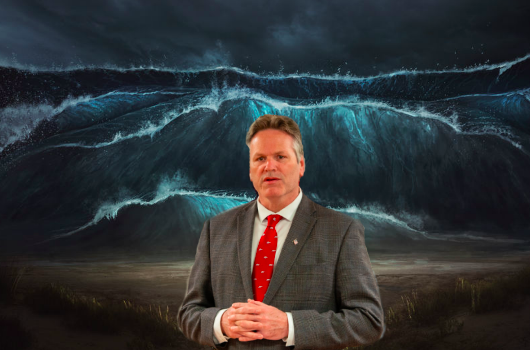 It’s been a year since Gov. Mike Dunleavy was sworn into office on Dec. 3, 2018. Just five weeks after his taking the oath of office in Kotzebue, the first lawsuit landed.

It was from an angry Juneau lawyer who, as an “at will” state employee, was released from employment from the Department of Law last December. Libby Bakalar, who also runs a tart Twitter account and now represents pro bono anyone who wishes to sue the governor, has since called for a union for state lawyers like she was, to protect them from a governor who might wish to see them gone.

It didn’t take long for a tsunami of lawsuits to flood the Dunleavy administration, along with ballot initiatives that his political adversaries are using to either ensure he is not in office long, or make it impossible for him to downsize state government. Or deliver on his promise to pay a full Permanent Fund dividend to qualified Alaskans.

Here’s a list, to date, of what leftist have filed in the courts to ensure their vision of a big government, no accountability economy remains viable:

01/10/2019: Bakalar, Elizabeth vs. Dunleavy, Michael J. On Feb. 6, the case was moved to U.S. District Court. The presiding Judge is John W Sedwick, who was once a judge in the Bill Allen corruption trial. The last action in the court was Sept. 17, 2019, an answer to the complaint. This former assistant attorney general was one of the first to be released from the Dunleavy Administration and is suing the governor and his former Chief of Staff Tuckerman Babcock. Bakalar is represented by the ACLU.

01/10/2019: Blanford, Anthony and Bellville, John et al vs. Dunleavy, Michael J. On Feb. 6, the case was moved to U.S. District Court, case number 3:2019cv00036. Assigned to Presiding Judge John W. Sedwick, moved to Judge H. Russel Holland. Discovery and other filings are not due until August, 2020, expert witness lists due in April, 2020. Blanford and Belleville, who were both psychiatrists at Alaska Psychiatric Institute, were released after they did not provide a letter saying they wanted to stay on with the administration. Blanford and Bellville are represented by the ACLU.

Blanford has since been hired back by the company brought in to manage API, which was on the verge of total chaos when the Dunleavy Administration assumed office.

05/01/2019: Coalition for Education Equity vs. Dunleavy, Michael; assigned to Judge Yvonne Lamoureux. This case involves an attempt by the Dunleavy Administration to cut funding for education. The case is in the discovery phase with cross motions. Attorneys for the coalition, headed up by the wife of Sen. Tom Begich, are Howard Trickey and Matt Singer. The group, which is funded by State funds that are sent to school districts, and are then given to the group as membership dues, also filed to intervene in a separate case involving school funding.

07/15/2019: Kevin McCoy and Mary Geddes vs. Dunleavy, Michael. These two Anchorage attorneys, self-represented, sued after Dunleavy called a special session in Wasilla. They claim only Juneau can be the site of a special session. The case was assigned to Judge Herman Walker, who recused himself. It was reassigned to Judge Josie Garton, who has ruled that the two have standing and the case may proceed.

07/17/2019: American Civil Liberties Union of Alaska on behalf of Bonnie Jack and John Kauffman vs. Dunleavy, Michael. They are suing over “punitive” cuts to the court system that were made by Dunleavy, which represented less than one percent of the court’s budget. Dunleavy’s rationale was that if the Supreme Court insisted on the State paying for elective abortions with Medicaid funds, then it should come from the court’s administrative budget. The case is assigned to Judge Jennifer Henderson.

07/16/2019: The Alaska Legislative Council vs. Dunleavy, Michael, regarding Fiscal Year 2020 forward funding for education and whether the Legislature can tie up state funds in future years without actually having those funds yet in the treasury, essentially check kiting programs. Assigned to Judge Daniel Schally, the attorney for the Legislative Council is Hillary Martin, and individual legislators against Dunleavy are represented by Gov. Walker Chief of Staff Scott Kendall. On Nov. 21, the final judgment went against the governor, and it was appealed to the State Supreme Court.

10/9/2019: Parker, Kelly S vs. Dunleavy, Michael. The case, assigned to Judge Jennifer Henderson, this involves yet another State attorney who feels she was wrongfully fired by the Dunleavy Administration after she refused to submit a resignation letter. Kelly is represented by the ACLU.

11/04/2019: Rider, Marion et al vs. Dunleavy, Michael. This case involves families of those with relatives in the Alaska Pioneer Home who don’t think the State should have increased the fees for those living in the state-funded homes. The case has been assigned to Judge Trevor Stephens. On Nov. 25, Vance Sanders and Elizabeth Bakalar, attorneys for the Riders, made a motion for a class action certification.

On Nov. 27, the Recall Dunleavy attorneys filed a motion for the court to accept an “over-length brief” regarding a motion for a summary judgment. The recall group cites 15 offenses that they believe show a recall election should proceed. They are likely betting that the judge will approve at least one of them as legally sufficient, enough to get it on a ballot this year. The Department of Law has until Dec. 16 to respond.

11/14/2019: Vote Yes for Alaska’s Fair Share vs. Meyer, Kevin (lieutenant governor) and the Division of Elections. (See ballot initiative below). The case is assigned to Judge William Morse. Although the pro-tax group was given the state Attorney General’s OK on initiative language, and the Division of Elections director’s approval to begin collecting signatures on the petition for a higher oil tax production, the group disputes a characterization by the Attorney General that the petition language is misleading. The lawsuit was filed by Robin Brena, who heads up the Vote Yes group, and who is the primary funder of the ballot initiative. Brena is former Gov. Bill Walker’s law partner and a long-time advocate for higher oil taxes.

11/20/2019: Denali Nicole Smith vs. Dunleavy, Michael J., Kevin Clarkson, Bruce Tangeman, Anne Weske. Smith is married to a woman in the military. She lives out of state with her wife. Smith claims she was denied a Permanent Fund dividend because of her marital status. The governor and Department of Law dispute that claim and say her check was in process, and that she knew it was in process when she filed the lawsuit. This appears to be a political lawsuit meant to teach the governor some kind of lesson. Caitlin Shortell and Heather Gardner are attorneys for Smith.

19OGTX – An act relating to the oil and gas production tax, tax payments, and tax credits. The group calls it the Fair Share Act, and it seeks to unwind Senate Bill 21, the current governing legislation that determines taxes on oil. Petition booklets have been distributed, and signatures are being gathered. Primary sponsors are Robin Brena, Jane R Angvik, and R Merrick Peirce. Brena is former Gov. Bill Walker’s law partner and Peirce is a Bill Walker colleague from the defunct Alaska Gasline Port Authority. Story here. The group is trying to get the signatures by Jan. 21, to make it onto the a ballot in 2020.

[Read: Education Bill of Rights has no measurable standards]

19AKBE – Alaska’s Better Elections Initiative. Petition booklets not yet distributed. The group is seeking to upend Alaska’s election system by eliminating the party-specific primary, creating a “jungle primary,” with “instant runoff” and a ranked voting methodology, and eliminating the ability of citizens to create independently run campaign groups to support candidates or initiatives. This initiative is supported entirely by Outside funders from the East Coast targeting Alaskans to make it easier for Democrats to take control the state.

The lieutenant governor said no to the initiative because it violates the single-subject rule. The group sought to be allowed to collect signatures anyway, while the matter goes through the courts. An Alaskan filed a lawsuit against the lieutenant governor to prevent the distribution of the petition booklets for signatures. The petition books are now out and signatures are being collected.

More information on some of these lawsuits can be found in an earlier status update from last summer:

A party divided by PFDs, but it didn't have to be like this