Media watch: Reporters, bloggers, Democrats curb-stomp Republicans for no masks and having fun 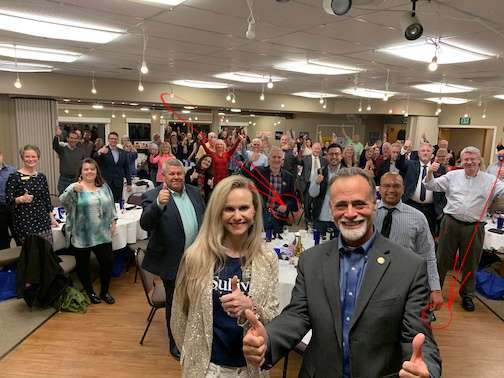 NO MENTION OF MASK-FREE FOOTBALL GAMES ON SAME DAY

The mainstream media is on a mission to find fault with those who don’t wear masks everywhere.

No sooner had Sen. Peter Micciche posted a photograph of a group of Republicans having a dinner and auction in Homer in a large banquet room, than the knives came out by reporters. Republicans were on the menu.

James Brooks, reporter for the Anchorage Daily News, saw the photo and got busy texting and calling Rep, Sarah Vance, Sen. Micciche, and even Commissioner Kelly Tshibaka, to ask why Republicans defy official recommendations and have political events. Tshibaka was the master of ceremonies, and she and Micciche had just finished auctioning off some items when the photo was taken, a point left out by the reporter.

The trouble with the mainstream media narrative is that the photo was of a group of people (Republicans) who had just had a dinner, as they would in any restaurant. Tables were spread throughout the room, with just five seats to a table that would normally seat 10. Besides, dining out at a restaurant is still legal in Alaska and certainly on the Kenai Peninsula, where the cases of COVID-19 are relatively low.

Brooks and leftstream bloggers were quick to criticize Sullivan, who arrived in a mask and wore it during most of the event, except for when photos were taken and when he delivered his remarks.

Earlier in the week, a big event at a large hanger near Lake Hood attracted over 100 participants to raise money for Republican candidates.

Reporter Brooks attended that event and was one of several who wore masks, although most at the event were maskless.

The Homer photo, taken at the Lands End banquet room, also got the notice of liberal blogger Matt Buxton. He gets his paycheck from Democratic political consultant Jim Lottsfeldt. Buxton tsk-tsked Sen. Dan Sullivan for not having a mask at the event. The blogger evidently chose not to notice that Sullivan was holding his mask in his hand for the photo.

The Mudflats blog was not to be outdone by mean-stream blogger Buxton. Jeanne Devon, who runs psy-ops for the Alaska Democratic Party, blended science and voodoo into her karmic wishes for Republicans:

Liz Ruskin, also a public broadcaster, added her passive-aggressive remarks, insulting the intelligence of Republicans by wondering if they were not aware the president had contracted the China virus:

This is how mainstream media narratives are formed, by left-wing writers and broadcasters talking to each other on Twitter and solidifying the assault.

Also in Homer on Saturday, the Soldotna Stars overpowered the Homer Mariners in high school football action. No reporters or bloggers seemed to notice that high school sporting events were mask-free and continuing on the peninsula.

Is this news? Mainstream wants you to congratulate the Obamas by voting