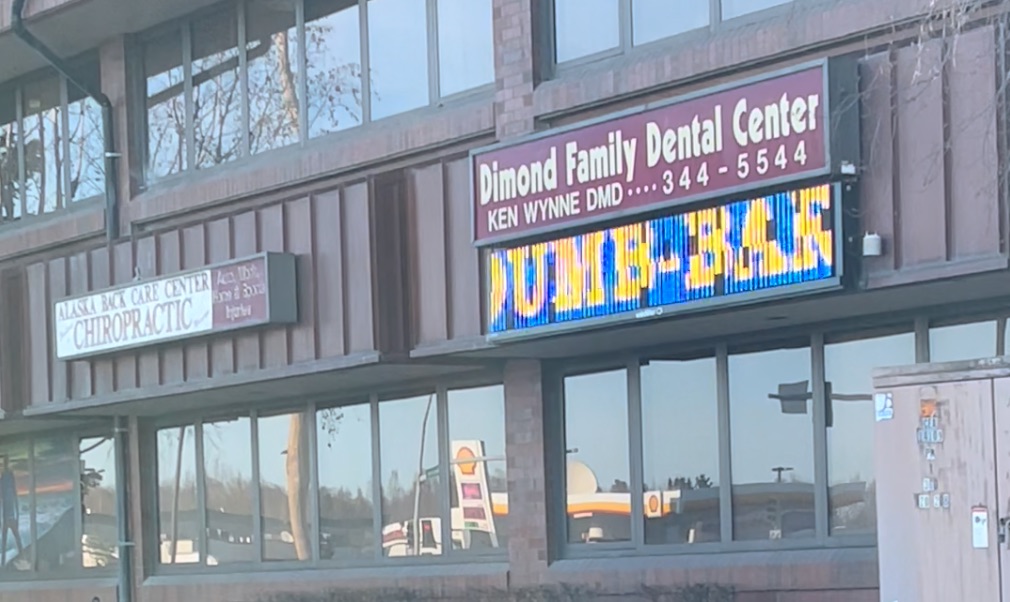 Ken Wynne, a dentist with a practice on the corner of Old Seward Highway and Dimond Blvd, has an opinion about Forrest Dunbar, progressive candidate for mayor: Dunbar doesn’t respect taxpayers.

Dunbar is, according to the sign outside Wynne’s practice, “DUMB-BAR ARROGANT ASSEMBLY PERSON.’

Wynne’s bright LED sign caught the attention of Tom Lucas, an attorney at the Alaska Public Offices Commission. Lucas says the sign probably needs to have a “paid for” disclaimer on it.

The problem is, there is no payment to track, because it’s one man’s viewpoint.

It also might be illegal for another reason: If the signage space is owned by the business, this could be considered a business contribution to the Bronson for Mayor campaign. Business contributions to campaigns are illegal under Alaska law, Lucas said.

The problem is, the campaign had nothing to do with the sign, so would APOC fine the dentist? How much?

The LED sign scrolls out the words “BRONSON HAS COMMON SENSE. WILL END LOCKDOWN.”

Lucas said the sign caught his attention because it’s on a commercial building. That may mean it is sign space that usually goes for a price, or is owned by a company, rather than a person.

There’s a lot of gray area in the APOC rules, and some of it comes down to judgment. All over town, there are signs for Bronson and Dunbar, and many of them are on commercial properties in high-traffic locations. These signs have “paid for” disclaimers on them and are the usual 4×8 campaign signs.

This sign is unique. It’s one man’s view of the current choice available to Anchorage voters, and it’s attached permanently to his building, even if the message is impermanent.

Lucas said he’ll be looking into the matter further, and Wynne, who spoke about the matter on the Dan Fagan Show, was unavailable when Must Read Alaska called, but as of this morning, the sign was still up.