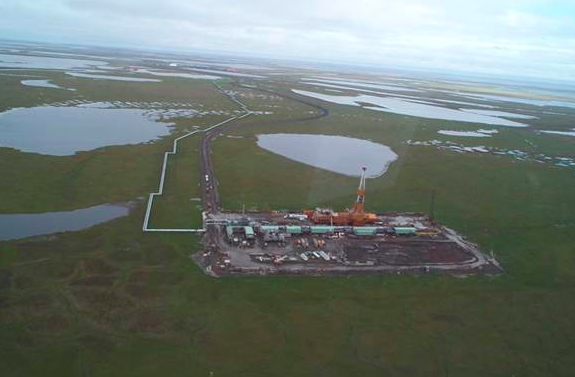 A major step forward for the proposed Greater Mooses Tooth 2 production pad in the  National Petroleum Reserve in Alaska was announced today by the Bureau of Land Management.

It will be the second significant project by ConocoPhillips in the Greater Mooses Tooth Unit.

The peak workforce during the winter construction period is estimated to be 700 and estimated peak production is 25,000 to 30,000 barrels per day going into the Trans Alaska Pipeline System.

ConocoPhillips applied for a permit to drill in August of 2015. Today, the Final Supplemental Environmental Impact Statement was released, which makes good on the Trump Administration’s commitment to jump-start Alaska energy. It will bring more jobs to the North Slope to develop a 14-acre pad and up to 48 wells. A pipeline and access road will cross Native lands as well as federally owned lands in the NPR-A. Infrastructure includes an 8-mile road and 8.6-mile pipeline.

ConocoPhillips has budgeted the project at $1.5 billion for development.

“Oil and gas development in the NPR-A is important to meeting our nation’s energy needs and this analysis provides a responsible path forward in balance with resource protections. And, throughout the process we are proud of our efforts of involving the people most affected by development activities on the North Slope of Alaska,” said Joe Balash, Assistant Secretary for Land and Minerals Management at BLM.

The area was leased in 1999 and development was originally approved as CD7 in the BLM’s 2004 Alpine Satellite Development Plan EIS.

A notice of availability for the Final Supplemental EIS for the Alpine Satellite Development Plan for the Greater Mooses Tooth 2 Development Project will be published Aug. 31.

A record of decision could be issued within 30 days.

Troopers get big raise from governor, but...

Walker, Begich agree with each other at forum