I’ve never really understood the antipathy towards Alaska’s Legislature. I’ve been around long enough to remember when everything that didn’t go the way the Editorial Board of The Anchorage Times wanted, it was because the capital was in Juneau and the Legislature met there.

The voters of Anchorage and the Mat-Su embraced moving the capital from Juneau; the rest of the State not so much, but the ballot initiative did pass.

Paying for the move was another matter, and the anti-move forces proved to be far better propagandists than were the capital movers. Alaska was full of big ideas in those days and the “Buy the NFL” campaign was masterful. Both live football and a nearby team, the Seahawks, were still new, and Alaska was more than a little football crazy. The central notion was that Alaska could buy every club in the NFL for less than it would cost to move the Capital from Juneau. Every town in Alaska could have its own football team. Or they could move the capital.

It was utter fiction but the pro-movers couldn’t effectively rebut it and it left a mark. Then, as now, the Juneau denizens knew more about running and keeping the government than the capital movers knew about taking it.

Moving the capital has long been a Republican thing, and keeping it in Juneau has been a Democrat thing. It bears remembering that Alaska was so deeply Democratic that it was only admitted to the Union concurrently with equally deeply Republican Hawaii, and Alaska remained firmly Democrat until the 1980 election gave the Republicans control of the State Senate (The 1964 House was 20-20, but the Speaker was Bruce Kendall, then still a Democrat.)

I read with interest the comments to Gov. Dunleavy’s piece here on Must Read Alaska about his public safety initiatives in which various self-styled true conservatives are screaming at him for not exercising dictatorial powers; Alaska’s governor has great authority over running the Executive Branch of State government, but actually has very little authority over running the rest of the state.

The Legislature runs the state and the governor just follows orders. The governor can issue administrative orders regarding the processes of the Executive Branch with pretty much untrammeled authority, so long as the order is constitutional.  The governor can also issue executive orders on other matters, but they are subject to review and potential reversal by either the courts or the Legislature. In terms of promulgating statutory authority, Alaska is a very democratic state. Alaska’s founders took that business about all power coming from the people seriously and the Legislature is the instrument of that power.

My friend Mike Tavoliero has a piece up on Must Read Alaska about moving the legislative session to Southcentral.   I’m not opposed to it but, I don’t share Mike’s enthusiasm for it.

If you moved the session to downtown Anchorage, the only thing that would change would be there would be more school kids in the gallery and more frustrated teachers trying to get them to take their ear buds out and stop texting. Everybody who knows enough about issues and politics to talk coherently with a legislator already knows how to contact a legislator. Sadly, lots who don’t know how to talk coherently also know how to contact a legislator.

If the communist dimwits that have controlled the Anchorage Assembly in recent years could get interested in anything other than feathering their and their friends’ in the homeless industrial complex’s nest, they’d have long ago gifted the unused Egan Center to the Legislature and maybe put up a little seed money for necessary remodeling.

Of course these are the same left wing nuts who trashed a Legislative Information Office near the downtown government complex just because some Republicans might have gotten nice offices. Later, the police that the Lefties hate got a nice office from that debacle for a few dimes on the dollar.

Back to Mike’s point, you really haven’t lived until you’ve been a Republican elected or appointed official in the beautiful, friendly People’s Republic of Juneau. By the later years of my career there, Juneau was as segregated as the small southern town where I grew up in the 1950s and 1960s; Republicans went to Republican places and did Republican things, while Democrats went to Democrat places and did Democrat things.

To this day I don’t share the same room with a Democrat unless it is a public accommodation or I’m being paid to be there. My union “friends” gave me my own shrine in the front window of the Teamster’s Hall across from the Willoughby Street entrance to the Juneau State Office Building, the SOB; the most aptly named building in America.

Juneau isn’t all bad or all lefty.  I had a prominent local lefty do a Mad Maxine Waters on me and confront me in “The Hangar,” a popular watering hole, one evening.  I had reached the “I don’t care” stage of my career and got right in his face and insulted and threatened him out of the joint. I couldn’t buy a drink for the rest of the evening.

For the Executive Branch, the capital has largely moved; most of the commissioners and directors are based in Anchorage and are only in Juneau for session. Other than the infrastructure divisions, those that are the ministers of the internal government, Juneau is basically a regional center for the government; much like Fairbanks.

The legislative session gives a welcome boost to the Juneau economy in the winter and keeps it from becoming Sitka, Ketchikan, or Skagway, which are ghost towns when the cruise ships leave. But then, so is Anchorage. If you haven’t noticed — and it is easy not to notice because there is no reason to go there — Downtown Anchorage is a wasteland.

I disagree with most of the fundamental principles of the opponents of Juneau as the capital. You can’t hide in Juneau.  If you want to hide, you go to Anchorage, or basically any place other than Juneau. There are a helluva lot more discrete, comfortable watering holes in Anchorage than in Juneau.

It is a valid argument that Juneau is too remote and too expensive to travel to or subsist in. The only argument that makes any sense to rational people is a purely economic argument. Had I moved my division to Anchorage, it would have been a 25% or so raise for me and my staff, and would have saved the State several hundred thousand dollars a year in travel costs.

I think it is inevitable; the capitol has always been in the political and economic center of the State. Kodiak was the center of Russian government, then Sitka. Sitka remained the Capital until Juneau exploded with gold wealth in the early years of the 20th Century.

For much of the first half of the 20th Century Juneau was the richest town in America and maybe The World and was the seat of Territorial Government and then the State.

The economic center of Alaska today is Anchorage, for better or worse. Just remember that all those leftist interest groups that haven’t already moved their offices to Anchorage will follow the capital here. They make for interesting neighbors.

Criminal complaint: Doctors who signed complaint against fellow physicians now complain they got unwanted chocolate and information in gift bags

Legislative committee to spend $100,000 to investigate why Permanent Fund Corp president was removed by board

11 senators call for investigation of collusion by teachers union, Biden’s DOJ and DOE, against parents opposed to Critical Race Theory 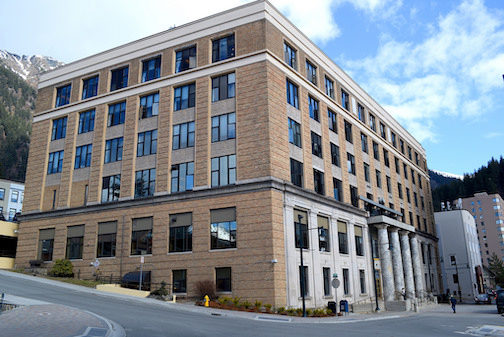 Alaska North Slope crude tops $90 a barrel, and Alaskans wonder if they can now have their Permanent Fund dividends