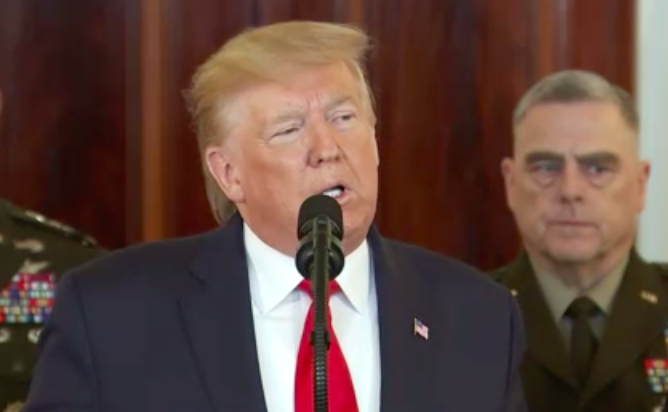 The global oil markets reacted ever-so-slightly to the military tensions in the Middle East.

After Iran and the United States shared their thoughts with each other through missiles in recent days, the threat of major conflict boosted prices to over $70 a barrel.

Even the “World War III” scenario painted by MSNBC, CNN, and House Speaker Nancy Pelosi only pumped the price up by a smidgen.

Brent oil contracts, the global benchmark reached $70.74. Alaska North Slope crude will likely trade in the mid-70s today. The ANS price on Monday was $70.51; (Tuesday’s and Wednesday’s prices are not yet available, check back, this will be updated.)

Higher energy prices, now that the United States is an net exporter of petroleum products, may serve to stimulate the overall national economy, although it will also lead to higher heating oil and transportation costs in Alaska.

Today, President Donald Trump reiterated the importance of the U.S. having not only a strong military, but a strong economy. In a speech at the White House, he said that for too many years the world has tolerated Iran, which he called the largest exporter of terrorism in the world.

In May of 2018, Trump announced that the U.S. would pull out of the Iran nuclear agreement, formally known as the Joint Comprehensive Plan of Action (JCPOA). Trump called the nuclear “a horrible one-sided deal” that should have never been made and said the U.S. would not be held hostage to “nuclear blackmail.”

Today, he said that the “foolish” deal that President Barack Obama made, which sent $150 billion of U.S. taxpayer dollars to Iran, resulted in Iran using those dollars to send missiles out against its regional enemies and the United States.

“They chanted death to America the day the agreement was signed,” Trump said today. He said that the retaliation of Iran against the United States appears to have ended with the missile attacks on U.S. bases in Iraq — attacks that killed no one.

Alaska now knows what the world looks like under the great “brink of war” scenario — which is a slight uptick in price. It’s not likely to see prices go as far as $100 a barrel.

The price bump of the past few days doesn’t necessarily help the Alaska budget situation unless two big fields come on line — Pikka Unit (Oil Search) and Willow (ConocoPhillips), both of which don’t yet have a final investment decision from their respective companies.

Alaska needs that production to bail its state budget out, if the government is unwilling to trim back its spending.

But production won’t increase if the Our Fair Share initiative passes with voters this year. In fact, without those two fields coming on line, production will suffer from the dwindles.

It’s a new era for Alaska, as it only provides a fraction of the oil that is being produced in the United States:

That makes is more evident than ever that price will not bail out Alaska’s state budget, which receives 90 percent of its revenue from petroleum.

What can Alaskans do to boost production? Industry leaders say voters will need to stand on the throat of the Our Fair Share initiative, and tell the oil producers that investing in Alaska is a good business decision.

Justice Stowers retiring, but will he be replaced by a conservative?