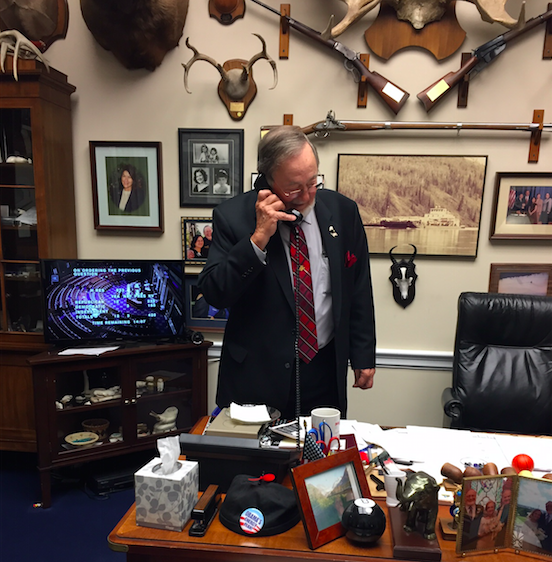 SETS RECORD FOR BOTH SENATE AND HOUSE

As the oldest current member of the U.S. House of Representatives, he became the Dean of the House on Dec. 5, 2017, and he works with 75 House members who were not even born when Young first came to Washington. Young is the last remaining member of Congress who has been in office since the Nixon Administration.

A veteran of the U.S. Army, he moved to Alaska in 1959, around the time of statehood. He settled in Fort Yukon, where he worked in construction, fishing, trapping, and mining. He captained a tugboat on the Yukon River, hauling barges delivering products along the river. He still holds his mariner’s license. In the winter, he taught fifth grade at the local Bureau of Indian Affairs school.

In 1972, he lost his race for the House of Representatives to the incumbent, Rep. Nick Begich. Begich disappeared in a plane crash on Oct. 16, 1972, but won the election anyway. He was declared dead on Dec. 29, 1972, and Young ran in a special election on March 6, 1972, and won against Democrat Emil Notti. He’s won every election since.

Young is the longest serving Republican in both the House and the Senate because the late Sen. Strom Thurmond of South Carolina changed parties in the 1960s from Democrat to Republican.