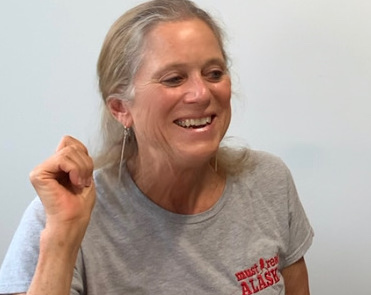 Alaskans were shocked last week to learn that the FBI and other federal agents busted down the door of a Homer, Alaska couple, looking for House Speaker Nancy Pelosi’s laptop computer, which is supposedly missing after the Jan, 6 surge into the U.S. Capitol by protesters and Trump supporters. The agents never found said laptop, but their raid is part of a pattern of federal law enforcement that Alaskans know too well.

Paul and Marilyn Hueper were asleep in their Kachemak Bay-side home when FBI, Capitol Police, and other unknown agents broke their door down, handcuffed them and their houseguests, and interrogated them for hours last week. The agents said they were searching for proof that Marilyn Hueper had entered the U.S. Capitol on Jan. 6. Marilyn and Paul had indeed gone to the nation’s capital for a Trump rally, but did not go inside the building. Marilyn says it was a case of mistaken identify.

We’re believing the mistaken-identity explanation. But Alaskans could be excused for chalking it up to yet another case over federal law enforcement excess. We are not unfamiliar with federal raids that turned up nothing but injustice.

Some of our memorable heavy-handed federal agent actions in recent Alaska history:

2007: Sen. Ted Stevens’ home in Girdwood was raided by FBI and IRS agents on a hunt for evidence about Stevens’ relationship with businessman Bill Allen, who was under investigation for corruption. Stevens, 84 at the time, was indicted on July 29, 2008 on several counts of failing to properly disclose the remodel costs of his home and alleged gifts from VECO Corporation CEO Bill Allen. Stevens was up for re-election in 2008, thus he requested a speedy trial to resolve the matter. By then, Allen had already pled guilty to bribing Alaskan state legislators and his sentencing was delayed until after he testified in the Stevens’ case.

Stevens was found guilty on all counts on Oct. 27, 2008. He became the fifth sitting U.S. senator in history to be convicted of a crime and he lost the election a few days later. Until being replaced by Mark Begich in January, 2009, Stevens had been the longest-serving Republican senator in U.S. history.

Just three months later, an FBI agent admitted that the FBI had withheld evidence that would have been in Stevens’ favor. The agent’s affidavit also alleged that a female FBI agent had an inappropriate relationship with Bill Allen. Washington D.C. U.S. District Court Judge Emmet Sullivan, who presided over the trial, held the prosecution in contempt for failing to turn over documents. Later, the Department of Justice dropped all of the charges.

2007: John Sturgeon was navigating his boat on the Nation River on his way to a legal moose hunt in the Yukon Charley Preserve, when federal agents told him he could not proceed because the river was on federal land. National Park Service Rangers threatened to cite him for violating a National Park Service ban on hovercraft in federal park units.

Sturgeon fought the case all the way to the United States Supreme Court, which ruled not once but twice in favor of the moose hunter, and agreed that navigable waters in Alaska are under state jurisdiction. Sturgeon fought the feds for 12 years and it took $1.2 million in legal fees to vindicate the rights of Alaskans to use their rivers.

2013: Chicken, Alaska miners at a small placer outpost near the Canadian border were shocked when FBI and ATF agents descended on them for violating the Clean Water Act. The agents wore bulletproof vests and were well-armed in case the raid became hostile.

Gov. Sean Parnell opened an independent investigation, which found that the federal agents would not cooperate with the investigation, and also found there was no need for a criminal assumption against the eight placer mines in the first place.

Federal agents have made blunders elsewhere in the country with sometimes-deadly consequences that we’ve not seen in Alaska, where so many are well armed in their homes, on their hunts, or at their mines.

In a 1993 Waco, Texas raid, ATF agents tried to execute a search warrant on the Branch Davidian compound and its leader David Koresh. In that raid, four ATF agents were killed and 16 were wounded, and five Davidians died.

The 2014 Bundy standoff was an armed confrontation between cattle rancher Cliven Bundy and his supporters and federal law enforcement. It occurred after the Bureau of Land Management got a court order for Bundy to pay over $1 million in  grazing fees for Bundy’s use of federally owned land next to his ranch in southeast Nevada. The Bundy family has confronted federal officials for years over grazing rights. Those disputes continue in courtrooms and refuges across the West.

Pebbled: When the government dictates 'advanced prohibition' of any project

Sullivan looks back at challenging year and forward toward Alaska's opportunities