In June, Alaska Department of Law attorneys were ready to advise the lieutenant governor that the Stand for Salmon petition was not likely to pass constitutional muster.

That way, Lt. Gov. Byron Mallott could reject the petition, with the legal research to back his decision. It is, after all, his to decide.

Stand for Salmon, an eco-glomerate of environmental interests, offered the petition to place an anti-development initiative on the ballot. It was a thinly veiled anti-Pebble initiative, but it was much, much broader, covering all manner of development.

But Mallott never had to make a public decision on the petition. 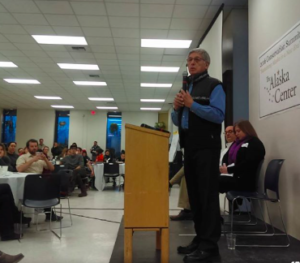 Democrat Lt. Gov. Byron Mallott speaks to the Alaska Center for the Environment before the beginning of the legislative session. Looking on from behind him are House Resources co-chairs Andy Josephson and Geran Tarr, both Democrats.

Instead of giving the information to Mallott, the Law Department sent the petitioners a detailed letter 18 days in advance of Mallott’s decision deadline, describing the constitutional deficiencies of their petition, explaining that it was not likely to pass legal muster, and giving them a chance for a do-over.

In her letter, the attorney general provided essential guidance on how the petition could be fixed. Attorney General Jahna Lindemuth put her thumb on the scale on behalf of the petitioners.

The Stand for Salmon group got busy with its legal team. It withdrew its original petition on July 14 — three days before Mallott was to issue a decision, and refiled a reworded petition that same day. The group addressed the Law Department’s concerns, mainly found on Pages 3, 6, and 8.

The new review deadline for Mallott’s decision is Sept. 12.

AG Lindemuth had sent her June 30 letter to Mike Wood, Bryan Kraft, and Gayla Hoseth, the petition sponsors, with the helpful advice:

“As noted above, should you choose to withdraw your application before the July 17, 2017 deadline, our office will not issue an Attorney General Opinion on 17FSHB. We will independently consider any subsequent initiative application that you may choose to file,” says the letter from the Attorney General’s Office, signed by Lindemuth and state attorney Elizabeth Bakalar, author of a left-tilting blog, OneHotMessAlaska (parental guidance advised).

WHAT THE INITIATIVE SEEKS

The Stand for Salmon referendum would, among other things, take away appropriating authority from the Legislature, and this was a big problem identified by the Department of Law: Only the Legislature has the power to appropriate.

The act would require a permit for any activity that would use, divert, obstruct, pollute, disturb, or otherwise alter anadromous fish habitat.

That means no permit would be given for a water treatment plant, wells, groundwater pumping, or other mechanical, chemical, or human intervention, maintenance, or care in areas near many waterways in Alaska.

As written, the act would prevent the construction of almost any dams in Alaska. Some hard-rock mines would be prohibited because they require “perpetual” water treatment.

Roads, gas lines and pipelines often require permanent re-routing of anadromous waters; most of these, too, would be prohibited under the act. Bye-bye King Cove Road, Juneau Access, and any hydro project.

Moreover, the act would favor one resource over another: Salmon over everything else.

GIVING TOO MUCH HELP TO ONE SIDE?

In the letter to the petitioners, AG Lindemuth states that, “When practicable and when circumstances warrant, we work with the sponsors of ballot initiatives prior to certification, to try to fix problems with the language of the ballot measure summary or with the form or substance of ballot initiative applications.”

It was her way of saying, “We’re here to help you get this on the ballot,” an approach that former lieutenant governors have told Must Read Alaska is unusual and perhaps lacking impartiality, especially if it is applied selectively to ballot initiatives favored by the Administration.

Moreover, the petition’s intent had already drawn the concern of those who had opposed the measure when it was a proposed law in the Legislature back in March.

Similar language had been originally been offered as a bill by Reps. Louise Stutes of Kodiak, and Andy Josephson and Les Gara of Anchorage. Stutes chairs the House Fisheries Committee and her bill raised alarms throughout other economic sectors in the state, from oil and gas to mining and transportation.

Among those expressing concern about Stutes’ House Bill 199 were the Alaska Oil and Gas Association, the Resource Development Council, the Council of Alaska Producers, Native interests such as Calista and the Kuskokwim Corporation, as well as Alaska Miners Association and, curiously, the Bristol Bay Fishermen’s Association, which said that Stutes’ law didn’t go far enough.

Karen Matthias, of the Council of Alaska Producers, wrote to the House Fisheries Committee in opposition to HB 199 “because it would shut down responsible resource development projects across the state, jeopardize the continuation or expansion of existing operations, delay and add costs to road construction and other state infrastructure projects, and it would inhibit community development. The real fiscal impact of this bill would be staggering.”

Matthias continued: “This bill creates a new permitting program that is more stringent than the applicable federal laws without giving any reason why the Clean Water Act, the Endangered Species Act, and the National Environmental Policy Act are deemed insufficient to project fish habitat and wildlife in Alaska.”

WHY DIDN’T IT PASS AS A BILL?

When HB 199 died, it was in part because Stutes didn’t want it to move too quickly.

“I am putting this bill forward to begin the public process so that it can be vetted totally, clearly, fully over the interim,” she said at the time. “I do not want to move this legislation in the House Fisheries committee this season.”

More likely Stutes realized the bill would kill her re-election chances if she moved it at all. Hers was a head fake. It was better for the proponents of the bill to take it to the ballot than for her to risk further political capital. Stutes is a member of a three-pronged group of Republicans (including Gabrielle LeDoux and Paul Seaton) that joined Democrats to take over power in the House this year, allowing her to take the coveted chairmanship of the Fisheries Committee.

By May, petition sponsors Wood, Kraft and Hoseth delivered a petition similar to Stutes’ bill to the Alaska Division of Elections. It contained 350 names, enough to get a review for ballot consideration.

The petitioners have been vocal critics of the Pebble mining project in Western Alaska, and Chuitna coal mining near Cook Inlet, but the voter initiative would not only cover those mining opportunities, but nearly any development project — public or private — that disturbs any waterway in Alaska.

Instead of fighting projects on a case-by-case basis, petitioners seek sweeping powers for the Department of Fish and Game to stop development, defining in law fish habitat as nearly any standing or moving body of water, including seasonal flood plains, and adjacent areas, and predetermining that any watershed is fish habitat unless specifically designated otherwise by the commissioner of Fish and Game.

Alaska’s Constitution allows for multiple use of water and wildlife resources, rather than prioritizing one use or policy over another. The constitution also disallows the appropriation of a resource to one group or for one use over another.

Lt. Gov. Mallott had 60 days to certify or reject the petition. That deadline expired Monday, but with the petition refiled, he now has another 60 days — until Sept. 12.

If certified, the group would gather thousands of signatures from across the state in order to advance the initiative to the November 2018 general election.

Not coincidentally, the initiative could be expected to draw anti-development voters to the polls, which would improve the electoral fortunes of Alaska’s Democrats.

DO YOU LIKE GETTING THE OTHER SIDE OF THE STORY? Must Read Alaska is truly crowd-sourced by Alaskans who appreciate an independent view of the news. We welcome your donations, whatever the amount. Look up on the right side of the page — that’s our PayPal donation portal. If you go there, you can contribute, and we can continue. Or mail a check to Must Read Alaska, 3201 C Street, Suite 308, Anchorage, Alaska 99503

Thank you so much for reading. Best wishes!