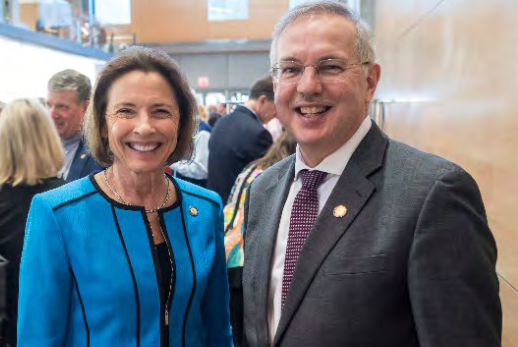 On day 131 of the 2019 legislative session and special session, a difference of opinion, and the power of the Alaska Governor’s Office have created an unlikely alliance between House Speaker Bryce Edgmon and Senate President Cathy Giessel.

The lifelong Democrat (Edgmon is now a playacting-undeclared) and a lifelong Republican are shocked that the Governor’s Office had the audacity to send text messages to Alaskans, telling them of the opportunity to testify on House Bill 1005. At least that’s how reporter James Brooks tells it for the Anchorage Daily News readership.

In a break with tradition, the House Democrat-led Majority had not posted a call-in number for Alaskans or made any good-faith public notice other than the required 12-hour notice that was available to those who know where to find it.

Such an action to avoid the public is an indication that the Democrat leadership was trying to dodge testimony altogether.

Gov. Michael Dunleavy intended to put the “public” in “public hearing.” Someone had to tell Alaskans about the hearing, because the House Majority had decided not hold a public hearing that didn’t allow the public to participate. Evidently it fell to the governor to explain to Alaskans what was in HB 1005.

IT’S THE PHONE TREE THAT BOTHERS THEM?

HB 1005, offered by Rep. Tammie Wilson, co-chair of Finance, would give eligible Alaskans a $3,000 Permanent Fund dividend this year. But in future years, the amount they would get would be cut in half, with the rest going to fund government.

[Read: OMG: Bill would cut future dividends in half]

HB 1005 was introduced last Wednesday, referred to House Finance, and the public hearing on the bill began immediately on Thursday, with only minimal public notice.

Those who did manage to call in and wait 45 minutes to testify were 99 percent opposed to her bill. There’s no indication that Gov. Michael Dunleavy would sign such a piece of legislation, which is counter to everything he ran for office on. Rep.’s Wilson and Edgmon did not discuss HB 1005 with the governor in advance of putting it forward.

But the governor has what is essentially a phone tree for the 21st century — text messages. The House Majority was furious the governor had out-foxed them by immediately contacting supporters of the statutory Permanent Fund dividend, who immediately flooded the lines with opposition to Rep. Wilson’s HB 1005.

Dunleavy’s office didn’t tell people exactly what to say, but just notified them that there was a bill they would likely be opposed to: “ACTION NEEDED: Lawmakers are voting to pay a full PFD this year, but to cut the PFD in half in future years. Immediately call 907-563-9085 to oppose HB 1005.”

At this stage of negotiations between the legislature and the governor, the Senate President and the House Speaker are together on HB 1005, at least for now.  But the governor is decidedly not on board.

In the Anchorage Daily News, Edgmon also expressed concern about the governor sending out text messages at a cost to the state.

Edgmon didn’t remember (and the reporter didn’t ask) about the tens of thousands of dollars that he and the House Majority spent a few weeks ago as they traveled to seven communities to hold public hearings that were designed to provoke testimony against Dunleavy’s proposed budget cuts.

Back in March, Edgmon’s justification for such expenditures was that “Given the historic nature of the decisions before policymakers and the fact that our savings accounts have been spent down, the committee is going above and beyond to listen directly to Alaskans. The hearings are the first of their kind in Alaska’s history.”

Clearly, the hearings were to gin up opposition to the governor’s budget cuts, which in Edgmon’s world view is an appropriate objective for the use of state funds.

That was then. Here’s Edgmon now:

“Have you ever seen anything like it, Bryce?” asked Senate President Cathy Giessel, R-Anchorage, in a Friday morning meeting.

“No, not anything like this at all,” replied House Speaker Bryce Edgmon, I-Dillingham. “(As) somebody who worked in the Capitol throughout the ’90s, and I’ve been a legislator for well over a decade — I’ve never seen an administration employ tactics like this, and especially, apparently using state funding to do it.”

Cultural anthropologists tell us they didn’t text back in the 1990s, but in 2019, it’s more common than phone calls. Even in Dillingham, where Edgmon lives part of the year.

Gov. Bill Walker did it more old-school when he used state funding to send a glossy newspaper insert to Alaskans, telling them of his plans for his gas line project. He used paper and ink to push his message at a critical time in the project’s history.

PFD IS THE ULTIMATE WEDGIE

House Rules Chair Chuck Kopp also used the dispute to solidify opposition in the House Democrat-led Majority to a full Permanent Fund dividend payout: “The messaging has caused the Senate and House to come closer together, and it is driving a wedge between the governor’s office and the Legislature,” he told the ADN.

When it comes to driving a wedge between the Legislature and the Governor’s Office, no one has better chops than Rep. Tammie Wilson, co-chair of House Finance. She told KTOO news two weeks ago that the governor lied about negotiations over the criminal justice reform package.

“All I can do is tell you, in every meeting I had, they were 100 percent on board with what we were doing, and it’s very disappointing that they came out and basically said that did not happen, because it did,” Wilson told KTOO.

Wilson calling the governor a liar may strike the reader odd because during the 30 days when the House could not organize, Wilson told her fellow Republicans that she was joining the Democrat Majority in order to help Dunleavy achieve his agenda. That assertion is looking questionable at this point.

Speaking to reporters on Friday, Speaker Edgmon expressed concern that if the next special session is held in the Mat-Su, there might be a need for greater security.

According to KTOO, Edgmon said he and other lawmakers are “apprehensive” about their security in the Mat-Su Borough: “I’m concerned about the security aspect, and if the governor does call us up there … I intend to sit down with the Senate president and talk about bringing more security presence for the Legislature, because I think it could be a very volatile environment,” Edgmon told reporters.

It may be the first time in history that a member of the Legislature has said that he doesn’t feel safe in another member’s district.

Meanwhile, Tuesday will be Day 13 of the first special session and so far, since the Legislature first met on Jan. 15, there is no crime reform bill, no operating budget, no capital budget, no Permanent Fund dividend, no education funding and no supplemental budget for the current waning fiscal year.

In other words, the Legislature has been in session 131 days and has not yet done its most basic work. The Senate has not even voted to pass the simple concurrence on HB 49, the legislation that unwinds the weak-on-crime package of SB 91.

The list of passed legislation that has not yet been transmitted to the governor is here.

Trump stops to say thanks to troops, meets with Dunleavy